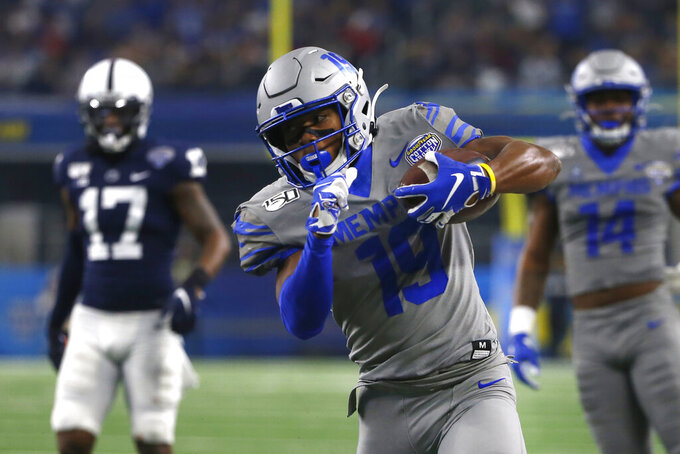 Memphis running back Kenneth Gainwell (19) carries the ball against the Penn State in the first half of the NCAA Cotton Bowl college football game, Saturday, Dec. 28, 2019, in Arlington, Texas. (AP Photo/Ron Jenkins)

After a whirlwind three weeks following Mike Norvell's departure to become Florida State's coach, the Tigers lost in their first New Year's Six game, which was Silverfield's debut as their head coach.

“I can promise you guys I will have this Memphis football team ready from here on out every single game as long as I'm the head coach here," Silverfield said after the 53-39 loss to Penn State on Saturday.

Brady White threw for 454 yards but was sacked a season-high six times and threw two interceptions — one when flinging the ball away while in the grasp of All-America linebacker Micah Parsons. The Tigers (12-2, No. 17 CFP) were limited to 63 yards rushing on 33 carries, though that includes all the yards lost on sacks.

The 39-year-old Silverfield, who has been coaching for 20 years but had only been a head coach on the high school level 15 years ago, came to Memphis with Norvell as offensive line coach. The former NFL assistant was also listed as deputy head coach this season. Norvell and his staff led the Tigers to the best four-year stretch in Memphis history.

Despite the disappointing finish, the Tigers set a school record for single-season wins and won the American Athletic title for their first outright conference title since 1969. They won 38 games over the past four seasons, even while losing bowl games each time.

“I hope we made a statement for the guys that sleep on the smaller schools that don’t have big names,” senior receiver Antonio Gibson said. “I hope they realize you can go anywhere and turn a program around."

Memphis scored more points and had more yards against Big Ten team Penn State (11-2, No. 10 CFP) than anyone else this season — though kicker Riley Patterson scored 21 of those points with his three extra points and Cotton Bowl-record six field goals.

Patterson's big day — five field goals of at least 41 yards, including a bowl record-long 51-yarder — came after concerns that he might not even be ready for the game after tweaking his ankle “pretty good” earlier this week.

“I didn't think I was going to be able to kick,” Patterson said.

Silverfield joked, “If that's how he kicks with a bum ankle, I'm going to be pushing him down starts every game next season as well."

White, a 23-year former graduate transfer, still has a season of eligibility remaining. He hasn't said yet if he will be returning after 4,014 yards passing with 33 touchdowns this season — though he didn't throw for a score for the first time since the season opener.

“It's not above individuals, it's about the entire team," White said. “And it takes a lot of work and dedication and sacrifice to win 12 games in a season, and a lot of things have got to go together. So I'm proud of that. I guess all the stats are bonuses, which is great, but I want to win.”