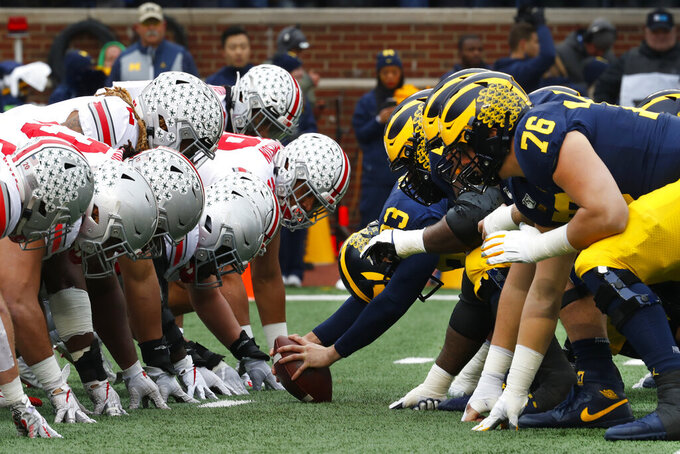 FILE- In this Nov. 30, 2019, file photo, Ohio State, left, and Michigan players line up at the line of scrimmage in the first half of an NCAA college football game in Ann Arbor, Mich. The Big Ten's third football schedule of the 2020 season is highlighted by Michigan-Ohio State on Dec. 12, the final day of the conference's regular-season and the latest date the rivals have ever played.(AP Photo/Paul Sancya, File)

The Big Ten’s third football schedule of the 2020 season is highlighted by Michigan-Ohio State on Dec. 12, the final day of the conference’s regular-season and the latest date the rivals have ever played.

The Big Ten released an eight-games-in-eight-weeks schedule on Saturday that will start the weekend of Oct. 24. Just three days ago, the conference reversed course and decided to play a fall football season after postponing on Aug. 11 because of concerns about COVID-19.

Week 1 features Nebraska at Ohio State, two teams that were at the forefront of the grassroots push to play fall ball in the Big Ten. Michigan will play at Minnesota in the Little Brown Jug rivalry to open the season.

In Week 2, Ohio State will play at Penn State on Halloween. The Buckeyes at No. 2 and Penn State at No. 7 were the highest ranked Big Ten teams in the preseason AP Top 25.

The regular season concludes as usual with the Buckeyes and Wolverines facing off. Michigan and Ohio State have played 103 times, but never later than November.

The Big Ten championship game will be played Dec. 19 in Indianapolis, matching the East and West Division champions. The conference has said it will give all its teams the opportunity to play on Dec. 19. The tentative plan is to match teams with similar finishes in the respective division standings.