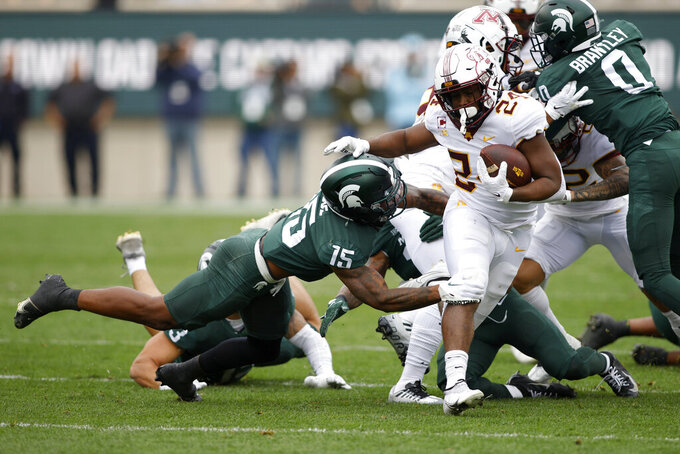 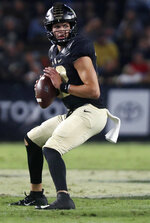 Line: Minnesota by 12½, according to FanDuel Sportsbook.

The Gophers have a golden opportunity this season to win the Big Ten West Division for the first time, with their remarkably strong start behind sixth-year stars RB Mohamed Ibrahim and QB Tanner Morgan and deep defense that has allowed only 24 points in four games. The Boilermakers still have a wide-open outlook, despite their early losses to Penn State and Syracuse, both of whom remain unbeaten. Their offense is potent enough to never be out of a game.

Purdue's defense vs. Ibrahim and Minnesota's running game. After holding Penn State to 98 rushing yards rushing on 32 carries in the opener, the Boilermakers gave up 189 yards on the ground last week to Florida Atlantic. The Gophers are second in the FBS with an average of 294.5 rushing yards per game. Ibrahim, who set the program record for career rushing touchdowns (41) last week, has a streak of 13 straight games with 100-plus rushing yards.

Minnesota: CB Justin Walley. The third-year player had an interception and a fumble recovery at Michigan State. He's tied for the team lead with CB Michael Dixon with two pass breakups.

Purdue: WR Charlie Jones. The last time Jones faced Minnesota, he played for Iowa and was primarily a return specialist. Now he leads the FBS in receptions (41), shares the lead with TD catches (seven) and is third in receiving yards (533). Even QB Aidan O’Connell’s absence (undisclosed injury) last week in a 28-26 win over Florida Atlantic barely affected his production.

Minnesota has won four straight in the series and eight of the last nine. Purdue has not won in six visits to Huntington Bank Stadium. The Boilermakers last won in Minneapolis at the Metrodome in 2007. ... Jones owns the Big Ten’s highest four-game receptions total since 2000. .... The Boilermakers have scored on 16 of their 17 trips inside the 20-yard line this season, cashing in with 15 TDs. ... Morgan was named Big Ten offensive player of the week after completing 23 of 26 passes for 268 yards and three TDs at Michigan State. ... The Gophers appeared in the AP Top 25 for the first time since Oct. 18, 2020.