No. 11 Baylor heads to Kansas to prep for Big 12 title game 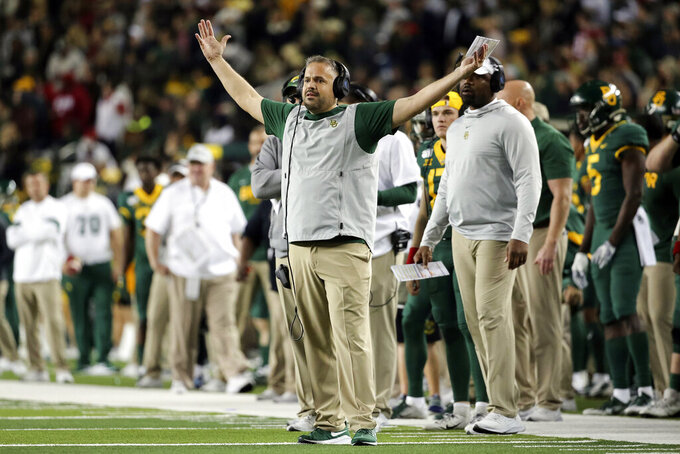 Baylor head coach Matt Rhule yells from the sideline during the first half of an NCAA college football game against Oklahoma in Waco, Texas, Saturday, Nov. 16, 2019. (AP Photo/Ray Carlin)

LAWRENCE, Kan. (AP) — Matt Rhule inherited a Baylor program in disarray following the ouster of Art Briles three years ago, and his first season was a foundation-laying, 1-11 campaign with few highlights.

Now, the Bears can complete an improbable flip of that record on Saturday.

Already locked into a rematch with Oklahoma in the Big 12 title game, the No. 11 Bears (10-1, 7-1 Big 12) head to Kansas trying to finish off one of the best regular seasons in school history. Only twice since the program’s founding in 1899 have the Bears won 11 games in a season.

One thing Rhule isn’t concerned about is the Bears looking ahead.

It would be easy to do.

Their lone loss came when they blew a big lead against Oklahoma, so a rematch with the Sooners is a tantalizing carrot. But there are also potentially bigger ramifications: Baylor jumped five spots to No. 9 in the latest College Football Playoff rankings, and an impressive next couple weeks coupled with quite a bit of help could be enough to push Baylor into the national semifinals.

Longshot? Sure. Out of the question? Not at all.

Kansas (3-8, 1-7) would love nothing more than to cap coach Les Miles’ debut season by playing spoiler.

The Jayhawks have had high moments — wins over Boston College and Texas Tech — but the season so far will be remembered for the close calls. There was the 12-7 loss to Coastal Carolina, the 29-24 defeat by West Virginia, the 50-48 road loss to Texas and last week’s 41-31 setback at Iowa State.

“It’s a first season with a new team and staff. It comes with some growing pains,” Miles said, “but none that you don’t expect and none that you’re not comfortable with. We’ll step over some puddles of water, but we’ll land on dry ground and we’ll go quickly.”

There was concern that Baylor quarterback Charlie Brewer sustained a concussion in last week’s win over Texas, but Rhule said he could have gone back in the game and should be fine for Saturday.

“I think we were smart to keep him out. And that was a really good opportunity to play (backup) Gary (Bohanon),” Rhule said. “I think he’ll be ready to roll.”

Kansas wide receiver Andrew Parchment has been a breakout star this season, catching 60 passes for 788 yards and six touchdowns in his first season since transferring from Northern Illinois. Asked what he thought of Year 1 under Miles, he replied: “I feel like next year will be a very good year for us, and I feel like just spiritually, mentally. I feel like everybody will be more locked in.”

Win or lose, Baylor will begin Big 12 championship preparations. And win or lose, Miles said the Jayhawks will be sending their coaches on the recruiting trail Sunday.

“We have been received very well in the homes and high school coaches have enjoyed our presence,” he said. “We'll be back on the road.”

Carter Stanley won a tough competition to be the Kansas quarterback this season, and the senior has gone through plenty of ups and downs. But he’s thrown for 2,569 yards with 24 touchdowns and only eight interceptions, giving him a chance to finish one of the better seasons in school history.

Rhule said he enjoys playing the week of a holiday: “There are no classes (Wednesday), so we were able to get the guys over early and meet, practice and meet again, and send them home. Let them be home for Thanksgiving and come back and walk through. ... I had never done it this way until last year, and we had a good result against Texas Tech. So I think the schedule is a plus.”