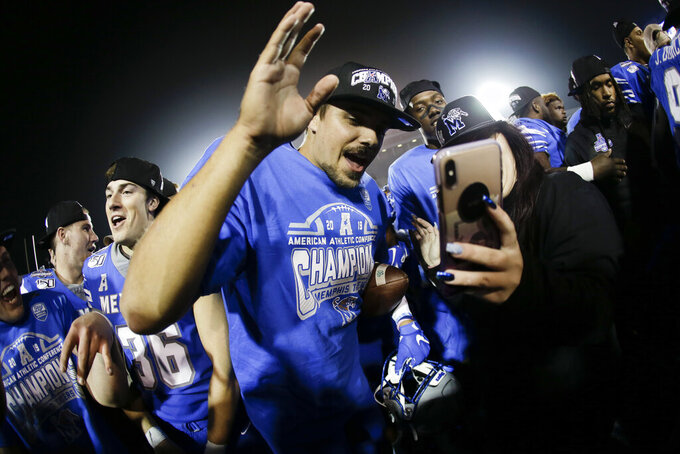 Norvell and the Tigers captured the American Athletic Conference championship — after failing the previous two years — as Brady White’s 6-yard pass to Antonio Gibson for a touchdown with 1:14 left gave No. 16 Memphis a 29-24 victory over No. 21 Cincinnati on Saturday.

Florida State will introduce Norvell as its new coach Sunday, two people with direct knowledge of the decision told The Associated Press. They spoke on condition of anonymity because the official announcement has not been made.

As for Norvell, he wasn’t tipping his hand regarding his future. Instead, the Memphis coach directed all of his postgame comments to his team.

On the game-winning scoring drive, Norvell leaned on Gibson, who capped the march corralling the TD pass. Gibson was the workhorse during the drive, carrying the ball five straight times for 23 yards, giving Memphis (12-1, No. 17 in CFP) third-and goal from the Bearcat 6.

On the play, Gibson split right instead of lining up in the backfield. He came in motion, caught the screen pass from quarterback Brady White and with three blockers in front of him, skirted in for the winning touchdown.

They used most of it before Gibson’s score.

“We were excited it was our turn to get the ball,” White said, adding, “That last drive, we knew without a doubt we were going to execute the way we know how to. We were going to own the football and do what we did. We were able to move the ball.”

It was closer than the season-finale between these eight days ago, which Memphis won 34-24, earning the right to host this game. This time, Cincinnati had starting quarterback Desmond Ridder available. Ridder, who was nursing a sore shoulder the first game, brought stability to the Cincinnati offense and the ability to scramble out of trouble – a trait not shown by Memphis’ White.

Ridder threw for 233 yards and ran for 113 more, including a 15-yard touchdown in the first half as Cincinnati took a 14-10 lead into the break.

In the second half, Memphis benefitted from a pair of field goals – 52 and 50 yards — by kicker Riley Patterson as the teams exchanged leads.

Cincinnati drove to the Memphis 26 on its final possession, but stalled.

Cincinnati: Ridder was key in giving the Bearcats a chance in the championship game. He was able to scramble more than backup Ben Bryant, who played in the first game between the two teams.

Memphis: White, a second-team all-conference selection, completed just 18 of 40 passes for 253 yards. Memphis was able to remain close with Patterson’s field goals. The victory – a school-record 12th for the season – is expected to earn Memphis a berth in the Cotton Bowl. A hint that the Cotton Bowl invitation is imminent may have come from the Memphis staff passing out the Cotton Bowl Teleconference information after Sunday’s invitations are issued.

The victory should assure Memphis of the top spot in the Group of Five and move the Tigers up in the rankings. As for Cincinnati, two straight losses to Memphis could drop the Bearcats even lower or out of the rankings altogether.

A key play came with 6:24 left and the Bearcats facing fourth-and-1 at the Tigers 26. Ridder tried to make it on a sneak and appeared short. But Michael Warren II pushed the quarterback ahead. After the play was reviewed, officials said there was no video evidence that there were 12 men on the field — another consideration — or to overturn the spot, thus giving Cincinnati a first down at the Tigers 25. That would lead to Sam Crosa’s 33-yard field goal to put the Bearcats up 24-23.

Memphis: Awaits bowl invitation, expected to be to the Cotton Bowl as the highest-ranked Group of Five team.