No. 18 Washington dominates in 40-22 thumping of Stanford 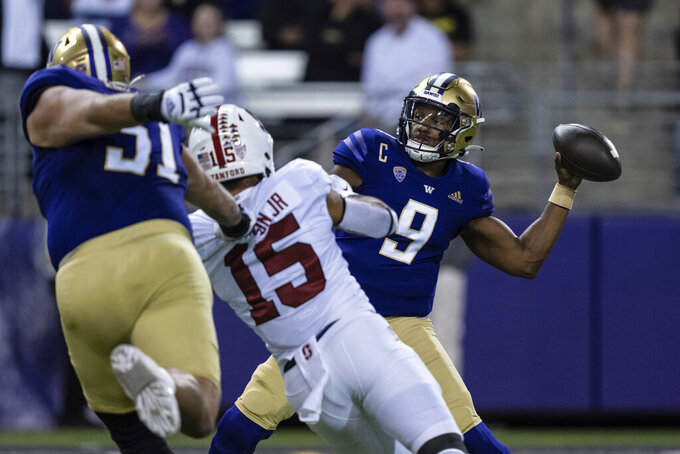 The Huskies' defense decided it was time for a little showcase of its own.

“It’s a great feeling because you know the momentum can snowball,” Washington pass rusher Bralen Trice said. “The momentum is going to keep going. You see it with everybody else, everyone else is eating, getting sacks and making tackles. Just the snowball effect.”

Playing as a ranked team for the first time this season, Washington (4-0, 1-0) used a stingy defense and a handful of big plays on offense to win its Pac-12 opener under new coach Kalen DeBoer.

Penix threw for 309 yards and second-half touchdowns of 30 yards to Rome Odunze and 21 yards to Giles Jackson on a screen pass. Odunze had eight catches for 161 yards, his first career game over 100 yards receiving.

But Washington’s defense deserved equal recognition for the constant pressure it was able to put on McKee. The Huskies sacked him six times in the first half.

Trice and linebacker Alphonzo Tuputala both had two sacks. Tupuola-Fetui had 1 1/2, as did Jeremiah Martin.

For his part, Penix was thrilled not to be facing the pass rushers on his own defense.

“I feel bad for other quarterbacks," he said. "Them boys show up every day."

“You’d love to play against this team with your starters at full strength, especially on the offensive line. And we weren’t able to do that,” Shaw said.

The Huskies have scored at least 39 points in all four games, and this time they did it without an otherworldly performance by Penix, who was 22 of 37 and still managed to top 300 yards passing for the fourth straight game. Will Nixon added a 3-yard touchdown run and Peyton Henry kicked four field goals.

Taulapapa was a less-heralded offseason transfer for Washington but earned the starting nod at running back for a reason. He showed flashes in the first three games but found massive gaps to run through against the Cardinal, averaging 9.2 yards per carry.

Taulapapa’s longest run came midway through the second quarter when he scampered down the sideline for a 34-yard touchdown two plays after a Stanford turnover. It was the first 100-yard game of Taulapapa’s career, both at Virginia and Washington.

“He is so consistent. He’s hard-nosed. He comes every day to work,” DeBoer said. “There’s nothing flashy about him. He just is a great teammate.”

McKee was 17 of 26 for 286 yards and three touchdowns. He hit Michael Wilson for 23 yards in the second quarter, John Humphreys on a 17-yard TD and found Wilson again on a 78-yard TD late in the fourth.

But it was Washington's pass rush that set the tone early. The Huskies entered the night with seven sacks on the season and had six in the first half. The biggest came from Martin when he was able to slap the ball from McKee midway through the second quarter.

Faatui Tuitele recovered the fumble and two plays later, Tualapapa broke free for his touchdown run and a 17-0 lead.

The Cardinal were without leading rusher E.J. Smith and starting right tackle Myles Hinton due to injuries. Casey Filkins rushed for 100 yards in place of Smith.

“We've just got to figure out a way to be more consistent and it just comes down to our preparation,” said Wilson, who finished with 176 yards receiving for the Cardinal. “Whatever we’re doing right now isn’t working. We've got to just double down and keep working harder.”

Stanford: Stanford’s turnover problems from the first two games emerged again. Along with McKee’s two fumbles, he was also intercepted in the first quarter deep in Washington territory when Filkins bobbled a pass directly into the arms of linebacker Cam Bright.

Washington: How dominant have the Huskies been on offense? For the first time this year they were forced to punt in the first half. Washington has punted just nine times in four games.

Stanford: The Cardinal are on the road again next Saturday at Oregon.

Washington: The Huskies go on the road for the first time this season and on a short week traveling to UCLA next Friday.