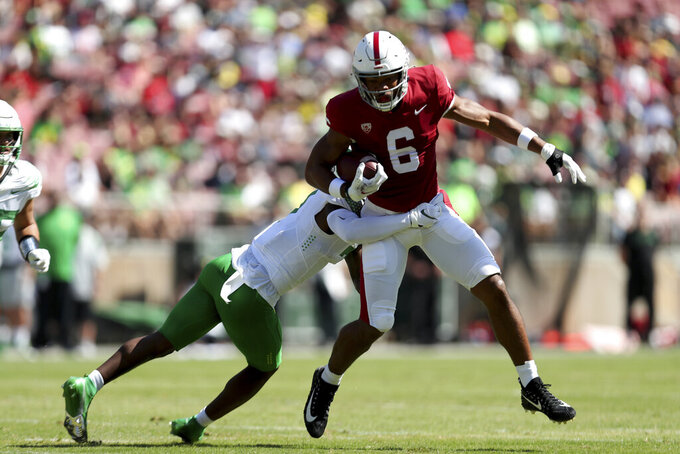 Stanford's Elijah Higgins runs after a catch against Oregons' Mykael Wright during the first half of an NCAA college football game in Stanford, Calif., Saturday, Oct. 2, 2021. (AP Photo/Jed Jacobsohn)

Line: Arizona State by 13 1/2, according to FanDuel Sportsbook.

Arizona State is looking to maintain its hold on its Pac-12 South lead. The Sun Devils moved atop the division with last week's road win over then-No. 20 UCLA and leads Utah by a half game. The Cardinal also are coming off a big win after knocking off No. 8 Oregon 31-24 in overtime and are a half-game behind North leader Oregon State.

Stanford's defense against Arizona State's run game. The Cardinal have one of the nation's worst rushing defenses, allowing 212.8 yards per game. They'll be put to the test against a Sun Devils team that loves to grind teams down with the run, averaging nearly 205 yards per game, third in the Pac-12. Arizona State has rushed for at least 150 yards in 10 straight games, its longest streak since doing it 12 games in a row in 1975-76.

Stanford: WR Elijah Higgins. The 6-foot-3 junior leads the Cardinal with 22 catches for 273 yards and three TDs. With Brycen Tremayne out due to a leg injury suffered against Oregon, Higgins and John Humphreys will be counted on even more against Arizona State.

Arizona State: QB Jayden Daniels. The junior is the highest-graded offensive player in the Pac-12 at 89.1 and is 10th nationally with 9.6 yards per passing attempt. He's been an excellent decision maker as well, throwing six interceptions in 538 passes since 2019.

Stanford has won six of the past seven meetings and is 4-1 under coach David Shaw. ... Arizona State has 32 rushing TDs in its last eight games, most of any FBS team. ... The Cardinal is playing its third straight game against a ranked opponent for the first time since 2014. Stanford lost to No. 24 UCLA 35-24 before beating Oregon. ... The Sun Devils are averaging 7.23 yards per play, sixth in the FBS. ... Stanford QB Tanner McKee has been solid in his first four starts, completing 61.7% of his passes for 975 yards and 10 TDs with no interceptions. ... Arizona State's defensive line is second in the FBS since the start of last season by pressuring the quarterback 46.5% of the time.