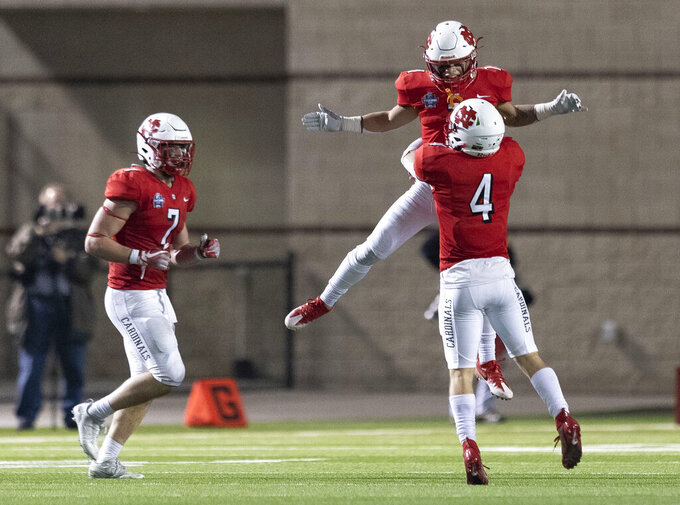 North Central of Illinois defensive back Julian Bell (1) is lifted up into the air by defensive back Dakota Cremeens (4) after intercepting his second Wisconsin-Whitewater pass of the night, during the fourth quarter of the NCAA Division III college football championship game Friday, Dec. 20, 2019, in Shenandoah, Texas. (Jason Fochtman/Houston Chronicle via AP)

SHENENDOAH, Texas (AP) — North Central of Illinois made the most of its first trip to the NCAA Division III championship game, starting fast and never looking back.

North Central was making its first appearance in the Amos Alonzo Stagg Bowl. The Cardinals’ previous best finish in the Division III playoffs was a semifinal loss in 2013.

“Just thrilled with the way these guys played,” North Central coach Jeff Thorne said. “These guys played their ever-living tails off like they have all year long. To be here in this position is just beyond description. Just so grateful.”

Rutter was 17 of 26 passing and ran for another touchdown, Andrew Kamienski caught nine passes for 134 yards and a score, and Julian Bell had two interceptions.

“We came out, we were ready to play,” Rutter said. “We couldn’t wait all day. We came out and executed the game plan.”

Thorne gave credit to his players and coaches for the win, but also credited his father, John Thorne, who took over the program in 2002 before he succeeded him in 2015.

“It’s been an incredible run for us,” Jeff Thorne said. “I’m grateful for everything that’s come our way. We’ve had to work for it, which makes it more rewarding. What it means is a dream that was launched in 2002 when my dad took this thing over and so many people put so much into this thing. … To see it to completion means the world to me and to be able to hand the trophy to my dad tonight was very special.”

Rutter broke the Division III record for career passing yards with his final touchdown pass, giving him 14,265 yards and surpassing Alex Tanney, who played at Monmouth College in Illinois. Tanney threw for 14,249 yards.

Rutter gave credit to his team and coaches for the record.

“I had no clue,” Rutter said of the record. “It’s a pretty cool accomplishment. … I’ve been doing this for four years, and it’s the best four years of my life. Time of my life. To get that is a nice reward to cap things off, but this national championship means so much more to me than that ever could.”

Greenfield scored on a 5-yard run less than three minutes into the game and capped a 13-play, 74-yard drive with a 2-yard scoring run with 1:49 left in the second quarter. Greenfield added a 38-yarder midway through the third quarter to make it 34-0.

In between Greenfield’s two first-half scores, Rutter found Blake Williams for a 31-yard touchdown strike late in the first quarter before Rutter had a 1-yard scoring with 10 minutes left in the second.

“They jumped on us right off the bat, and that was ultimately the story of the game,” Whitewater coach Kevin Bullis said. “We missed on some opportunities in the first half. They took advantage of their opportunities.”

Max Meylor was 25 of 42 for 183 yards and a touchdown, and rushed for 104 yards for Whitewater, and Alex Peete ran for 79 yards and a score. The Warhawks were making their 10th appearance in the championship game in the last 15 years. They last won the title in 2014, capping a string of six titles in eight years.

“They knew where I was throwing at times,” Meylor said. “They took away some of our receivers which was tough. We hadn’t seen that all year. My decision-making has to be better. I have to get the ball on guys and let our athletes run instead of taking chances.”

Meylor got the Warhawks on the board with a 12-yard touchdown pass to Jared Zausch with five minutes remaining in the third. Peete scored on a 1-yard touchdown run with 9 1/2 minutes left.