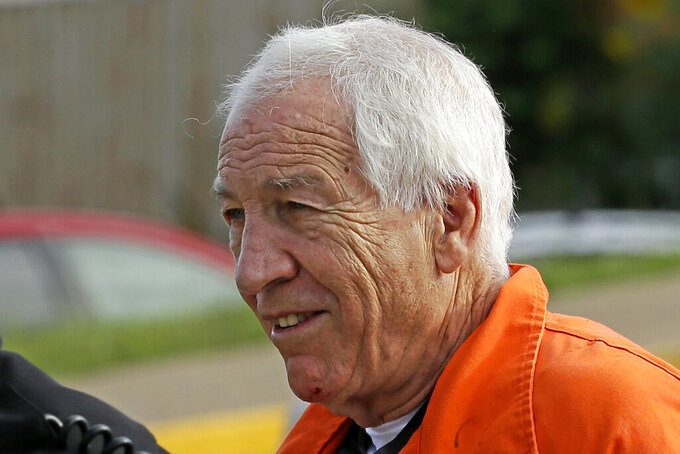 FILE - In this Aug. 12, 2016 file photo, former Penn State University assistant football coach Jerry Sandusky arrives at the Centre County Courthouse in Bellefonte, Pa. Sandusky isn't getting a fresh chance to argue in state court he should get a new trial, seven years after he was convicted of molesting 10 boys. Pennsylvania's Supreme Court on Wednesday, July 24, 2019 turned down the 75-year-old's request it review a Superior Court decision earlier this year that rejected most of Sandusky's arguments. (AP Photo/Gene J. Puskar, File)

HARRISBURG, Pa. (AP) — Jerry Sandusky won't get a fresh chance to argue in state court he should get a new trial, seven years after the former Penn State assistant football coach was convicted of molesting 10 boys.

Pennsylvania's Supreme Court on Wednesday turned down Sandusky's request that it review a Superior Court decision earlier this year rejecting most of his arguments.

His lawyer says he was surprised and disappointed by the justices' decision.

"We're very disappointed. We were very hopeful the Supreme Court would hear our appeal, because it's a very strong appeal," Sandusky defense attorney Al Lindsay said.

He said it is likely Sandusky will seek help from the federal courts, and he expects to meet with Sandusky later this week at the State Correction Institution at Laurel Highlands.

Superior Court had also ordered Sandusky be resentenced because mandatory minimum guidelines were improperly applied. Rhoads said the resentencing, on hold pending the high court decision about the appeal, can now proceed.

Sandusky's November 2011 arrest led to the firing of his longtime boss, head football coach Joe Paterno, and the forcing out of then-university president Graham Spanier.

Paterno died in 2012, months before Sandusky was convicted of 45 counts of child sexual abuse.

Sandusky had filed a multifaceted appeal that argued the investigation, trial and sentencing were replete with errors, but the three-judge Superior Court panel was largely unswayed in February, followed by the one-page order issued Wednesday.

Sandusky had argued his own lawyers should have kept him from giving a TV interview after his arrest, that his failure to testify was improperly cited by a prosecutor and that he should have been given information about changes to victims' stories before trial.

Sandusky, 75, was sentenced in 2012 to 30 to 60 years. Spanier and two retired Penn State administrators, vice president Gary Schultz and athletic director Tim Curley, were convicted in 2017 of child endangerment for failing to notify authorities in 2001 of a complaint about Sandusky and a boy in a team shower.

A federal judge in April threw out Spanier's misdemeanor conviction, less than a day before Spanier had been due to turn himself in to begin serving a jail sentence. The attorney general's office is appealing the Spanier ruling.