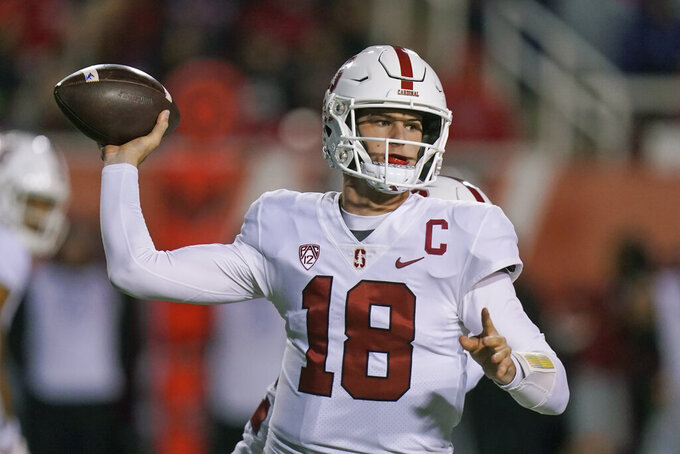 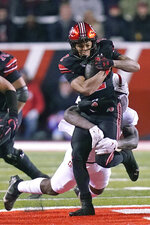 SALT LAKE CITY (AP) — A few weeks ago, Tavion Thomas was on the brink of losing his place on Utah’s football team.

Rushing for a career-high 180 yards on Saturday night proved he’s all the way back.

Utah’s defense was suffocating after the initial score while Thomas recorded his first 100-yard rushing game since the season opener at Florida and eclipsed his previous high (177) set at Stanford last year.

Thomas, who has been in and out of the lineup with personal issues, was pressed into heavy use because of injuries in the backfield.

“It’s been challenging but you can’t run from it, you have to attack it. I’ve got great guys here and a great support system and they got me back slowly but surely,” Thomas said.

He rushed for a four-yard TD in the second quarter and a 36-yard score in the fourth — his 28th career touchdown at Utah, moving him to third on the all-time rushing TD list.

“There were some bumps in the road … but I’m really grateful he continued to stick with it and fight through some of the issues he was having,” Utah coach Kyle Whittingham said.

Thomas was a 1,000-yard rusher and had 21 touchdowns last season but was away from team at times this season and missed the Washington State game. He struggled through the middle of the season but showed renewed speed and power in time for Utah’s quest for a Rose Bowl return.

“It was great to see Tavion in his last game at Rice-Eccles get back to his old self. I’m really proud of him and glad that he’s weathered the storm,” Whittingham said.

Rising went 20-for-33 through the air for 219 yards with an interception to boost Utah’s home winning streak to 14.

“Once we eliminated our mistakes, things started to go our way,” Rising said.

The Utes initially struggled to execute against Stanford, which allows the most rushing yards of any team in the conference. After three fourth-down conversions, including a fake punt, Utah finally scored on a Rising-to-Devaughn Vele 9-yard TD pass in the second quarter.

“We’ve always been good at getting off the field on third down this year but fourth down has been a different story,” Stanford linebacker Levani Damuni said about Utah going 4-for-4 on 4th down in the first half.

After that, the floodgates opened and Utah rolled to 514 total yards with 279 on the ground. At the same time, Stanford’s entire offense failed to outgain Thomas, garnering just 177 total yards.

“We are just doing our job. A lot of the mistakes that were happening early in the season were guys trying to make a big play and not doing their assignments,” said Jonah Elliss, who had 1.5 sacks.

On Stanford’s second drive, Tanner McKee evaded the rush and threw a 51-yard pass and then snuck in for a one-yard touchdown one play later.

In the end, McKee passed for 155 yards but didn’t have much time to throw and was sacked seven times.

“It’s going to be a dirty pocket. It’s going to be tight coverage. When we have those one-on-one opportunities with all the pressure, and we get the protection, we got to hit them,” Stanford coach David Shaw said.

Stanford: Without any semblance of a rushing attack — just 22 yards — the Cardinal couldn’t move the ball. Stanford’s defense forced Utah to convert four fourth downs to keep drives going but eventually wore down against the run and were exposed when Utah turned to the passing game against a stacked box.

Utah: The Ute defense looked suspect earlier this season and in this game, but dominated the second quarter by keeping Stanford without a single first down while the offense awoke. Once the Utah line controlled the line of scrimmage, the game was essentially over. Now Utah heads to Oregon in a battle in of one-loss teams.

UCLA, Oregon and Mississippi were ranked ahead of the Utes in the poll and all lost, so Utah may move up a couple notches.