Utah looks to continue Pac-12 success against the Beavers 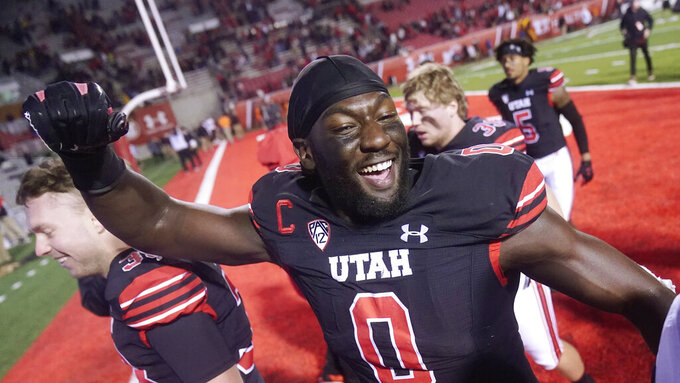 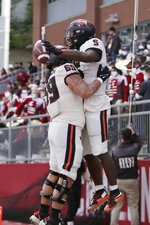 After a disappointing start and unspeakable tragedy, Utah has found its footing.

The Utes (4-2, 3-0 Pac-12) are the only undefeated team in conference play and sit atop the South Division. If they follow this trajectory, they could be in position to vie for a first-ever Rose Bowl appearance.

“We seem to be a little stronger in the second half this year,” Utah coach Kyle Whittingham said. "Each year is a little bit different. But that’s been our M.O. I don’t have a great answer for you, other than our guys do a really good job of hanging in there, overcoming adversity and handling adversity. That’s been the storyline this year.”

The team has been playing through grief since the tragic death of defensive back Aaron Lowe in a shooting at a party in Salt Lake City last month.

The Utes persevered, with a dramatic victory over USC — their first victory in Los Angeles against the Trojans since 1916 — and then a come-from-behind win over Arizona State last weekend.

Normally a strong defensive team, the Utes have been lifted recently by a clicking offense, Whittingham said.

“Offensively, I think we’re just starting to hit our stride,” he said. “We sputtered in the first few games. But the last two or three we’ve started to figure out who we are, who we have to get the ball to, and how we’re going to get them the ball.”

Next up is Oregon State. The Beavers host the Utes on Saturday with possible postseason implications on both sides.

Oregon State (4-2, 2-1) shares the lead for the Pac-12 North with rival Oregon. The Beavers are coming off a bye following a loss to Washington State, but they're still moving closer to their first winning season since 2013.

“We’re going to need to play better because our opponents will," coach Jonathan Smith said. "Each game is new, but we’ve got to improve in all three phases. Around this league, every game is going to come down to the fourth quarter and we’ve got to be playing our best at the end of games.”

Utah started the season with Baylor transfer Charlie Brewer as its starting quarterback. But after Cameron Rising took over in a loss to San Diego State, Brewer moved on.

Rising is 3-0 as the starter. He's thrown for 872 yards and nine touchdowns and has been named Pac-12 Offensive Player of the Week twice.

“He’s shown really great decision-making these past few weeks and Utah is playing great football. You watch that second half against ASU, and a lot of the momentum started with what he was leading on offense,” Smith said.

Oregon State running back B.J. Baylor leads the Pac-12, and ranks 11th nationally, with an average of 112.8 rushing yards a game. He's averaging 117 yards and has seven of his nine touchdowns at Reser Stadium this season.

Boosted by Baylor, Oregon State leads the Pac-12 in rushing with 242.5 yards a game.

“They’re leading the conference in scoring, as well as rushing, as well as third-down conversions. When you run the football that well, it lends itself to a lot of third-and-shorts, which they’re taking advantage of,” Whittingham said.

Utah's defense ranks fourth in the league against the run, allowing 132.5 yards a game.

LOOK OUT FOR LLOYD

Utah linebacker Devin Lloyd just keeps raising his profile. Against ASU, the junior had eight tackles, including four for loss and a career-high three sacks. He was named the Pac-12's Defensive Player of the Week for the second time this season.

Lloyd was named to the AP's midseason All-America team.

Recent history is on the Utes' side Saturday. Utah has won the last five games against the Beavers, including the last three in Corvallis.

With a win, Utah would open conference play at 4-0 for the first time since joining the league.

Oregon State, meanwhile, is 3-0 at home to start the season, the team's best showing since winning the first five home games in 2012.