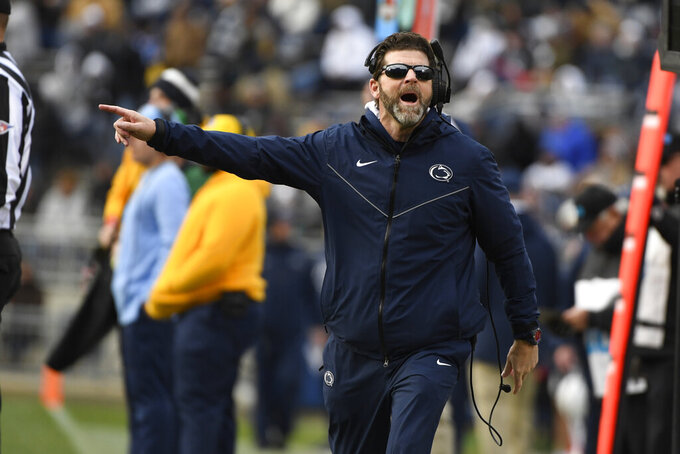 FILE - Penn State defensive coordinator Brent Pry gestures during the second half of an NCAA college football game against Rutgers in State College, Pa., Saturday, Nov. 20, 2021. Virginia Tech is finalizing a deal to make Penn State defensive coordinator Brent Pry its next head coach, two people familiar with the situation told The Associated Press. The people spoke to the AP on condition of anonymity Tuesday, Nov. 30, because details were still being worked out and neither school was prepared to make a formal announcement. (AP Photo/Barry Reeger, File)

Pry was a graduate assistant working with the defensive line under Foster, the hugely successful coordinator, as the Hokies rose to national prominence. Pry was in Blacksburg, Virginia, from 1995-97, going to three straight bowl games.

The school made the announcement Tuesday and plans to introduce Pry on Thursday.

“Coach Pry owns a winning track record on the football field, as well as a history of developing young men into leaders off the field and in the classroom,” athletic director Whit Babcock said in a statement.

“He’s earned his way up the coaching ranks, and we believe he is the right person to lead Virginia Tech football and to achieve the goals that we all aspire to attaining. He and his staff will aggressively recruit our region to keep in-state recruits home and attract the talent necessary to win championships.”

His hiring also received an endorsement from Foster, a Hokies icon who retired after the 2019 season.

“It’s been such a pleasure to watch Brent grow, mature and excel at a very high level in the coaching profession,” Foster said. “I’m so excited that he’s earned this opportunity to lead our football program. The best coaches are the ones who are always striving to get better, who are open to new ideas and who can put their players in the best position to be successful. Brent embodies all of those qualities and so many others that it takes to be a leader."

Pry said the opportunity to return to Blacksburg is exciting for him and his family.

“Even after I departed Blacksburg, I always continued to appreciate Virginia Tech, its great players, its championship teams, and its wonderful traditions from afar. The resources, facilities, university backing of athletics, and phenomenal fan support that Virginia Tech enjoys made this a very desirable situation," he said in the statement. “But just as importantly, the opportunity to raise our children in a community like Blacksburg also has great appeal.”

Coach Justin Fuente left Virginia Tech earlier this month after he went 43-31 in six seasons. Informed in a meeting with Babcock that his return was not certain, the sides agreed to part ways immediately.

Fuente's tenure started with a 10-win season and Atlantic Coast Conference coach of the year honors. But the program was hurt by a rash of transfers and declining results. The Hokies went 6-7 in 2018, their first losing season since 1992, and 5-6 last season when they were hit hard by the pandemic. It marked the end of a 27-year streak of going to bowl games, the longest at the time in the country.

Under Price, the Hokies lost 38-26 at Miami, but rebounded to beat Virginia 29-24 on Saturday. It was their 17th victory in the last 18 meetings in the rivalry and, at 6-6, secured bowl eligibility for the 28th time in 29 years.