Watch every bowl? Yes! Here's why they are all must-see TV 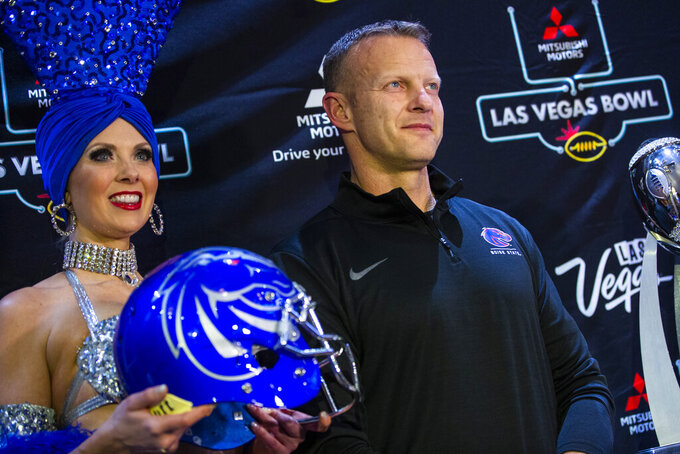 This bowl season starts a bit earlier and ends a bit later. The number of games is the same, but they are spread over more days.

That means more days with at least a little bit of college football, ending with the national championship game Jan. 13 in New Orleans.

We will save the playoff picks for another time. Do you really need a reason to watch the games that determine the national championship? For the other 38 games, you might need a little convincing. We're here to help.

The picks and a reason to watch every bowl game (all times EST):

Why watch? Impress your friends when you inform them Kent State coach Sean Lewis is both the youngest (33) and tallest (6-foot-7) coach in FBS.

Why watch? FCS football, but major college bands at halftime.

Why watch? You are that rare Florida fan who thought Jim McElwain, now coaching at CMU, really got a raw deal in Gainesville, and you want to root him on to a bowl victory.

Why watch? Remember when Liberty coach Hugh Freeze began the season coaching from a hospital bed? Tune in to find out how he's doing.

Why watch? FIU gave up 50 points to Middle Tennessee and then beat Miami for the biggest victory in program history. How does that happen?

Why watch? Chris Petersen's final game before stepping down as Washington coach comes against his former team. Should be a quality sendoff for one of the most successful coaches of the past two decades.

Why watch? App State beat two Power Five teams and probably deserves better than the New Orleans Bowl. The least you could do is watch the Mountaineers try to wrap up a 13-win season.

Why watch? Remember when UCF was a big deal? Ahh, those were the days.

Why watch? When you're putting together that bicycle you got your kid for Christmas, the Hawaii Bowl can distract you from worrying about all those “extra” parts.

Why watch? At some point, the 6-6 Hurricanes will break out the Turnover Chain ... in Shreveport .... against a Conference USA team ... without a shred of irony or self awareness.

Why watch? Feeling bloated and weary the day after Christmas? Have we got a bowl game for you.

Why watch? Catch the best freshman quarterback in the country: Sam Howell of the Tar Heels threw for 3,347 yards and 35 touchdowns.

Why watch? The Pinstripe Bowl has been the only opportunity to see a trophy ceremony at Yankee Stadium for a decade.

Why watch? Same reason to watch most Oklahoma State bowl games in recent years: You miss the original Big 12. Since the conference splintered in 2011, this will be the fourth time the Cowboys have played a former Big 12 member in the postseason.

Why watch? Did you know that Clay Helton is still USC's coach? Really!

Why watch? Last year's Cheez-It Bowl was a glorious 10-7 OT debacle between Cal and TCU. So bad it was great. This year features the yin and yang of college football. Air Force's triple-option averages 57 rushes per game. Wazzu's Air Raid attack averages 56 passes per game.

Why watch? The Cyclones pretty much play only close games. Nine of their 12 games were decided by 10 points or fewer. Should be a good one.

Why watch? Memphis has fun playmakers on offense such as RB Kenneth Gainwell and WR Antonio Gibson. Penn State has its next great linebacker in All-American Micah Parsons to chase them down.

Why watch? Find out which Western is the Best Western. (rim shot)

Why watch? Tired of all those pesky points in college football? The RedBox bowl produced 13 last year and probably won't do much more than that this year.

Why watch? The Cavaliers have not played in a bowl this big since they lost in the Sugar Bowl to Tennessee in 1991. And, hey, that game was close.

Why watch? Long for the days when games took less then three and half hours to play? K-State and Navy like to keep that clock rolling and the number of possessions down.

Why watch? SEC haters special. The Cowboys and Panthers both beat SEC East opponents in September.

Why watch? How back will Texas be heading into this offseason?

Why watch? No matter what happens, this game should create enough offseason content to get The Paul Finebaum Show through June.

Why watch? Defensive linemen wearing single digit jersey numbers is one of the best things about college football. That makes Auburn stars Derrick Brown (No. 5) and Marlon Davidson (No. 3) even more far to watch.

Why watch? Over the next year you will be hearing a lot about Oregon OT Penei Sewell. The sophomore is already the best offensive lineman in the country.

Why watch? At least one of these teams is going to be really into this game.

Why watch? There's no way you're putting in a productive work day this close to the weekend so might as well cut out early.

Why watch? The Hoosiers could win nine games in a season for the first time since 1967.

Why watch? Conference USA nostalgia. The Golden Eagles and Green Wave played every year from 1979-2010, with Southern Miss going 23-7.

Why watch? If you like smashmouth football, the Ragin' Cajuns are for you, averaging 6.39 yards per carry (second only to Clemson) behind All-America guard Kevin Dotson.

Championship week: 6-4 straight; 5-5 against the spread.