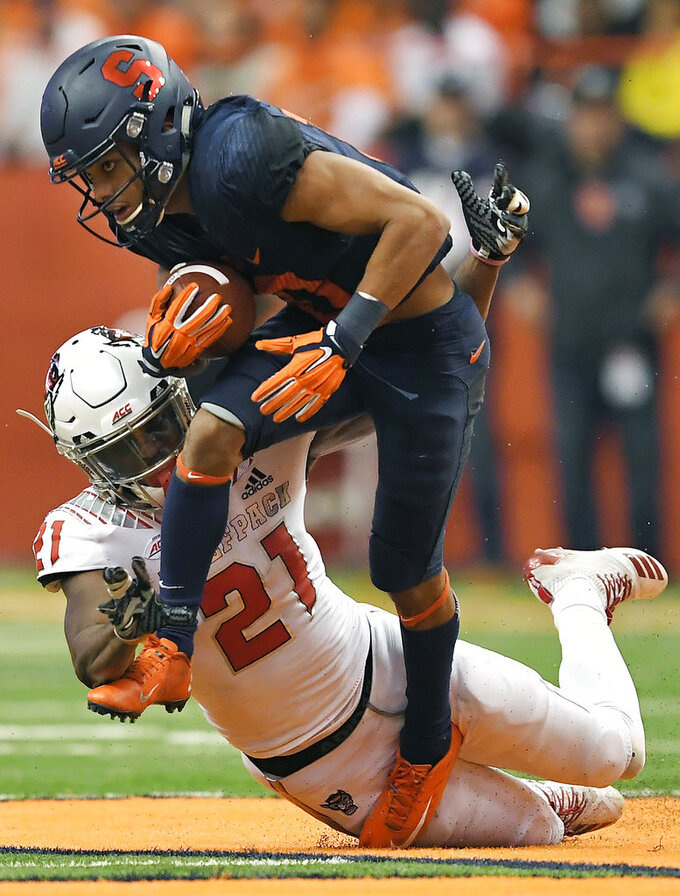 Syracuse wide receiver Sean Riley, top, tries to break the grasp of North Carolina State defensive back Stephen Griffin after a reception during the second half of an NCAA college football game in Syracuse, N.Y., Saturday, Oct. 27, 2018. (AP Photo/Adrian Kraus)

RALEIGH, N.C. (AP) — North Carolina State got off to a solid start defensively despite losing so much experience and NFL talent from last year's squad.

Perhaps those losses are now catching up with the Wolfpack, particularly through the air.

N.C. State has surrendered 92 points and 1,032 yards in the past two games, both losses after a 5-0 start that had put the Wolfpack in the Top 25 poll. While some of that is the product of facing two of the nation's top offenses in No. 2 Clemson and No. 22 Syracuse, coach Dave Doeren knows the Wolfpack must solve some problems entering Saturday's visit from Florida State.

"We've played two pretty good offenses, but that's not an excuse," Doeren said Monday. "We need to play better, and that's something our guys take personal and our coaches take personal. And that's what we'll be gearing up for."

It was clear there would be changes for N.C. State (5-2, 2-2 Atlantic Coast Conference) after losing eight defensive starters. That group included No. 5 overall NFL draft pick Bradley Chubb, part of a defensive line that had all four starters selected in the first four rounds.

The plan was to rely on the years of steady roster building within the program that had groomed last year's key reserves for leading roles this year. The early returns were promising; N.C. State ranked 16th in the Bowl Subdivision ranks in scoring defense (16.8 points) fourth in the ACC in total defense (341.4 yards) after the 5-0 start.

Things have been different since the Wolfpack showed up in Death Valley on Oct. 20.

"They're good at stopping the run," Florida State coach Willie Taggart said. "They've given up a lot explosive plays in the passing game. That probably hurt them a lot."

N.C. State had allowed just eight offensive touchdowns while holding opponents to 33-percent conversion rate on third down through its 5-0 start. In the past two games, the Wolfpack surrendered 11 touchdowns while allowing the Tigers and Orange to convert 52 percent (13 of 25) on third down.

On top of that, the Wolfpack committed five pass-interference penalties.

Doeren said the defense needs to get more pressure on the quarterback and focus more on fundamentals.

"Anytime you lose, you're going to look at every single thing like, 'Oh my God, that happened,'" Doeren said. "Then you look at the game, you're like, 'If we get one more stop, don't have a pass interference, we're off the field and third-and-11, and we win the game.' The line of questioning, the line of thinking is different.

"I look at it like there's a lot of plays that we've got to make — and why aren't we making them?"