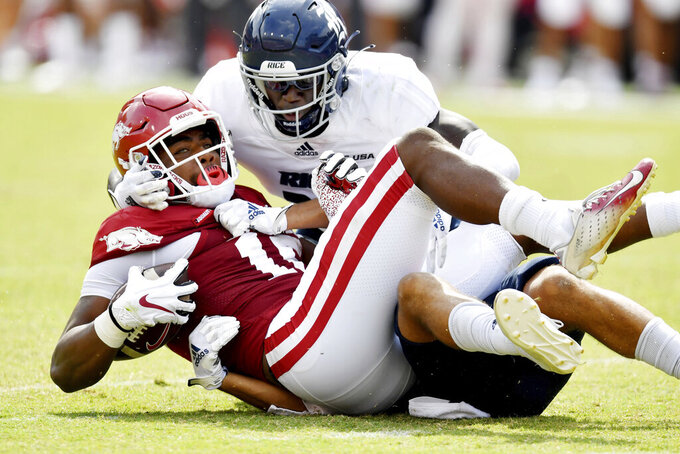 FAYETTEVILLE, Ark. (AP) — Arkansas must not have enjoyed the boos inside its own stadium.

The Razorbacks trailed at halftime against a Rice team that hasn’t beaten a power-conference opponent since 2013. In the first full-capacity game at Donald W. Reynolds Razorback Stadium in two seasons, a portion of the home crowd jeered at the break.

Arkansas then scored on five of its last six possessions of the game and ended up handling the Owls, 38-17.

Trelon Smith scored a go-ahead 2-yard touchdown with 12:44 left to give Arkansas its first lead since KJ Jefferson scored the game’s opening touchdown on a 34-yard quarterback draw. Arkansas followed Smith’s touchdown with a 9-yard reception by Tyson Morris from Jefferson and a 3-yard run by Dominique Johnson.

“We did about everything we could possibly do wrong in the first half,” Arkansas coach Sam Pittman said. “I told the team we were going to face adversity. I didn’t know it was going to be the entire first half. I’m so happy we won, but we didn’t field a very good football team today.”

Arkansas will have to be better next week against Texas. The two former Southwest Conference — and future SEC rivals — are meeting for the first time in the regular season since 2008.

Jefferson, in his second career start, was just 4 of 11 for 21 yards passing in the first half as the Razorbacks trailed, 10-7. His second pass of the second half, though, was a 31-yarder to Morris down the right sideline that resulted in a jumping celebration from the sophomore quarterback. Five plays later, he ran up the middle for his second rushing score of the game.

Jefferson ultimately finished 12 of 21 for 128 yards with a touchdown - an insurance score to Morris in the fourth quarter - and an interception. He added another 89 yards on the ground on nine carries. A 31-yard completion to Morris on his second throw of the second half seemed to shake free some of the nerves.

“I think that probably, to me, that was probably (when Jefferson settled). He knew he could throw it to our receivers and they’d catch it,” Pittman said.

Rice was fine until the fourth quarter began. Arkansas had tied the game on a 26-yard field goal at the end of the third, but Rice quarterback Wiley Green had a ball batted at the line of scrimmage that was intercepted by Jalen Catalon on the Owls’ first drive of the quarter. Catalon returned the ball inside the Rice 10 and Smith scored four plays later.

The Owls followed with a punt and two more Green interceptions on their next three drives. Two of Arkansas’ drives in response resulted in Arkansas touchdowns.

Green finished 12 of 25 for 152 yards with a touchdown and three interceptions. His score came on a 41-yard pass to August Pitre III on Rice’s second drive of the second half, giving the Owls a 17-7 lead.

Smith was Arkansas’ most consistent offensive player, running for 102 yards on 22 carries with the touchdown. He sat on the final drive with the game in hand.

Pittman was bullish that next Saturday would look sharper. Part of Arkansas’ early struggles, he figured, were nerves as Jefferson was making his second career start and the team played in front of its largest crowd in two seasons as Arkansas returned to full capacity after limiting spectators because of COVID-19 last year.

“A lot of bad stuff out there that looked like, as a head coach, wasn’t a very well coached football team,” Pittman said. “That’s me. It’s nobody else. That’s me. We’ll get better.”

Arkansas lost both its starting linebackers to targeting penalties. Grant Morgan, a preseason All-SEC second-team selection, was ejected with 8:28 left in the first quarter and Bumper Pool was lost midway through the fourth quarter. Pool will miss the first half of next week’s game against Texas.

Also, linebacker Hayden Henry missed the first half against Rice due to his targeting penalty in the second half of last year’s season finale against Alabama.

Treylon Burks, who was named preseason All-American by some publications this summer, had five catches for 42 yards. He hadn’t practice for most of the last week-plus with an undisclosed injury, though Pittman said he practiced a small amount Wednesday then the whole practice, a shortened version, on Thursday. Pittman was satisfied with Burks’ Saturday.

“I asked Arkansas (associate director of sports medicine Dave Polanski), ‘I don’t care if we’re playing the Green Bay Packers or Grove High school, is he healthy?’ Pittman said. Now all the sudden, all these publications coming out that he’s a first-rounder and all this, the guy hasn’t practiced a lot. I’m sure he had a lot of pressure on him as well.”

Arkansas looked like an SEC team in the second half after a poor first. More will be required against Texas next week.

Rice played well against its first SEC opponent since the 2013 Liberty Bowl for a half. Quarterback play may be the Owls’ key to 2021.

Arkansas will host arguably its most historic rival Saturday when Texas visits Donald W. Reynolds Razorback Stadium for the first time since 2006.

Rice and cross-town rival Houston play in Week 2. The meeting is the teams’ first since 2018.