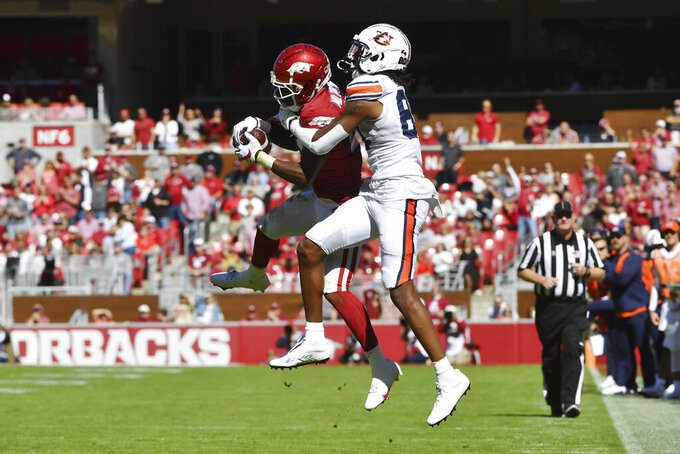 FAYETTEVILLE, Ark. (AP) — Three plays were all it took for Auburn.

The Tigers turned a three-point deficit into an 11-point lead in the span of 3:03 and staved off Arkansas’ attempted comeback to upset the No. 17 Razorbacks 38-23 on Saturday.

Auburn’s Derick Hall sacked and stripped KJ Jefferson in the Arkansas end zone and teammate Marcus Harris pounced on the fumble to give the Tigers a 21-17 lead early in the third quarter. On the ensuing drive, Jefferson marched the Razorbacks 45 yards, but on fourth-and-3 from the Auburn 30, he gained just a yard on a keeper.

One play later, Bo Nix found Demetris Robertson over the top for a 71-yard touchdown for Auburn.

“It was huge. Obviously the play of the game. Those back-to-back were important,” Nix said. “That just carried us on throughout the game into the fourth quarter when we got a chance to run the ball.”

Nix, less than a month after being benched in a 10-point win over Georgia State, had his best game of the season. He went 21 for 26 for 292 yards with two touchdowns and an interception. He also ran for another 42 yards, including a 23-yard touchdown with 2:30 left that provided the game’s final score.

Jefferson did what he could to keep Arkansas around, throwing for 228 yards and two touchdowns and running for another 66 yards.

Arkansas outgained Auburn 460 yards to 427. The Razorbacks had more first downs, a better third-down conversion rate and fewer penalties. But Auburn’s big plays made the difference.

“You score on defense you should have a really good shot at the game,” Auburn coach Bryan Harsin said. “To be on the road and to win, going into a bye week, all these things are big for our program. There were things we’ve all been working on that fell into place today. I am excited. I enjoyed that game.”

The passing game had especially been a concern. Nix entered Saturday 12th in the SEC in quarterback rating among starters. He was averaging fewer than 200 yards a game and his receivers, including Robertson, had been plagued with drops.

With the confidence of the fourth-down stop, offensive coordinator Mike Bobo drew up the play for his oft-maligned quarterback and wide receiver and it paid dividends.

“Nobody’s trying to put the ball on the ground, we know that. It was good to see our wide receivers, our passing game, have some explosive plays today,” Harsin said. “That’s not always what we do. Felt like (the long touchdown pass) was something we had set up. We had seen it, but hadn’t gotten to it.”

Auburn took advantage of an Arkansas secondary lacking two starters. Reserve cornerback Hudson Clark was defending Robertson on the touchdown, in for starter LaDarrius Bishop (hamstring), and safety Myles Slusher was helping because preseason All-American Jalen Catalon (shoulder) was out.

Arkansas coach Sam Pittman said after the game Catalon will miss the rest of the season.

“Mentally, you could see he wasn’t playing his type of ball,” Pittman said. “I think it’s time for him to get that shoulder fixed. I think that’s best for the kid.”

Nix finished off Arkansas on the Tigers’ last drive as he capped a 12-play, 75-yard drive with a knifing touchdown run through the middle of secondary.

Arkansas, which used a last-minute, length-of-the-field drive against Ole Miss last week to pull within a point before a potential winning 2-point conversion failed, didn’t have a chance for a repeat.

“It’s definitely the way that we’d like to finish the game,” Harsin said. “You want to convert, you want to stay on the field, you want to be able to run it at the end of the game. That was a drive I was very proud of.”

Arkansas: The Razorbacks were without a total of four starters against Auburn because of injury.

Auburn: The Tigers’ six-game winning streak in the series is the longest for either team. The Razorbacks haven’t won since a quadruple-overtime victory in 2015 when Bret Bielema and Gus Malzahn were the teams’ respective coaches.

Auburn: The Tigers entered the week as the leading vote-getter outside the Top 25. After beating Arkansas, they’ll almost certainly find themselves with a number next to their name next week.

Arkansas: The Razorbacks started 4-0 with a blowout of Texas, but could be unranked when the poll is released Sunday.

Auburn: The Tigers have an open date before hosting Ole Miss the day before Halloween.

Arkansas: The Razorbacks travel to their second home in Little Rock to play FCS Arkansas-Pine Bluff next week.