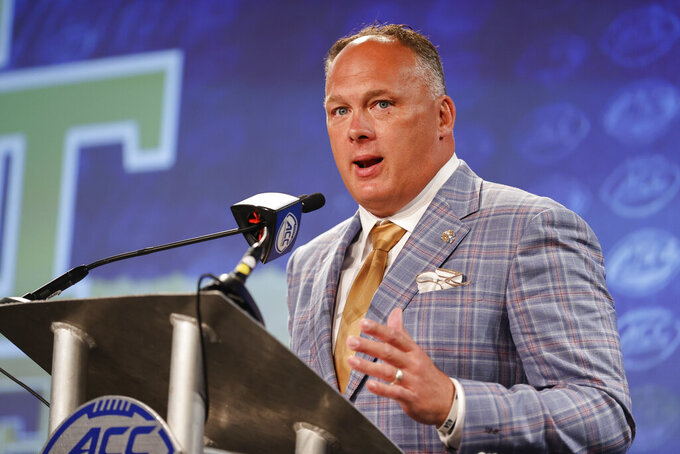 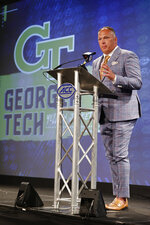 ATLANTA (AP) — Geoff Collins has toned down the hokey slogans that were part of his blueprint to build a proud, new brand at Georgia Tech.

He seems to realize there's only one thing that really matters.

After three seasons that each produced only three victories, Collins heads into Year 4 likely needing to show significant improvement to keep his job.

Only one other coach in Georgia Tech's modern era has gone this deep into his tenure with a worse record than Collins' 9-25 mark. That was Bill Curry, who was 8-24-1 at the three-year mark but at least saw signs of hope coming off a 6-5 campaign.

Not so for this Georgia Tech squad, which was outscored 100-0 by Notre Dame and eventual national champion Georgia in its final two games of 2021.

“We’re all tired of losing,” Collins said Saturday, less than 24 hours after the Yellow Jackets opened their preseason camp. “We want to play a really good brand of football. We want to make everybody proud who supports Georgia Tech.”

Everyone knew the road would be a bit bumpy after Collins took over in 2019, especially with the jarring transition from a run-oriented, option offense favored by his predecessor, Paul Johnson, to a pro-style attack.

Yet no one expected the Yellow Jacket to look like they're starting over again this deep into the Collins era.

At the Atlantic Coast Conference's preseason media event, Georgia Tech was picked to finish sixth in the Coastal Division, ahead of only Duke.

With a brutal schedule that includes three 10-win teams in the first five games — starting with Clemson on Labor Day at nearby Mercedes-Benz Stadium — it's hard to envision a path that leads the Yellow Jackets to a better showing than last year's 3-9 mark.

Collins is under as much heat as any coach in the country (well, perhaps excluding Auburn's Bryan Harsin) and knows he's got to show tangible proof that he's got the program headed in the right direction.

His players know it, too.

“We know it hasn’t been the best couple of seasons,” senior receiver Malachi Carter said. "But if we dwell on that, this won’t be a good season, either.”

During a nearly half-hour session with the media at Georgia Tech's indoor practice facility, Collins never mentioned the “404 culture,” his love of Waffle House or any of the other Atlanta-centric references he harped on during his first three years in hopes of giving his program a big-city appeal to potential recruits.

The incessant selling job prompted some critics to deride him as “Coach Slogan.”

Now, he's got to show he can coach some football.

As is often the case for those under fire, Collins made some big changes to his coaching staff.

On the offensive side, he brought in Chip Long as coordinator and 2000 Heisman Trophy winner Chris Weinke to work with the quarterbacks.

Both were hired largely with the intent of getting more production out of quarterback Jeff Sims, who has a big arm and plenty of running ability but has been far too inconsistent over his first two seasons.

“Absolutely,” Collins conceded. “That was the focal point through the entire conversation, the entire (hiring) process.”

Long and Weinke will largely have Sims and the offense to themselves, giving Collins a chance to devote more time to the other side of the line.

The Yellow Jackets ranked near the bottom of the ACC in most defensive categories, giving up 455.3 yards and 33.5 points a game. In a sign of the struggles that ranged from the front line to the secondary, they had only 20 sacks (Virginia was the lone team with fewer) and ranked last in the ACC with a measly three interceptions.

Collins, who was known during his days as a defensive assistant for aggressive units that created plenty of havoc, must find a way to bring out that style with the Jackets.

“Obviously, a lot of decisions that were made (with the coaching staff) were made for me to be able to spend more time with the defense,” Collins said. “All the new, fresh ideas, and people I can lean on as well, have been very beneficial for the program.”

That all sounds good. Now, it must show up on the scoreboard.

If not, Georgia Tech could be looking for a new coach.