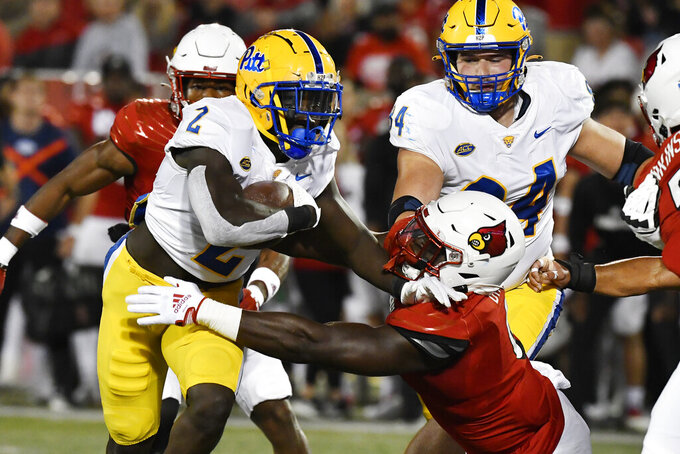 Pittsburgh running back Israel Abanikanda (2) attempts to get away from the grasp of Louisville defensive lineman YaYa Diaby, front right, during the first half of an NCAA college football game in Louisville, Ky., Saturday, Oct. 22, 2022. (AP Photo/Timothy D. Easley)

Cunningham tossed his second TD after a 33-yard catch-and-run on a pass from receiver Braden Smith to the Panthers’ 11. Two plays later a wide-open Lifson scooped up Cunningham's low 9-yard pass for just his second catch at Louisville and first score to make it 14-10 with 9:45 remaining. James Turner’s 48-yard field goal provided a seven-point cushion before Yasir Abdullah sacked Kedon Slovis and forced a fumble that Clark returned for the clinching score.

Lifson's TD was surprising, considering his previous touch was a 28-yard reception against Kentucky. Even bigger was Cunningham's reception, a play the QB said didn't work all week in practice.

“In my head, I knew that they were going to call it at some point," Cunningham said. "So I was, ‘I gotta make the play,’ and I did. Braden threw the pass good to me, and I followed my blocks.”

Cunningham also tossed a 12-yard touchdown pass to Marshon Ford early in the second quarter to tie the game at 7. He finished just 10 of 21 for 122 yards, but it was enough after missing a game with concussion-like symptoms. Louisville's bye gave him another week to recover.

The fifth-year senior was shaken up late in the first half after another hard hit and missed the Cardinals’ first series of the second half but came back to convert two big plays for Louisville (4-3, 2-3 Atlantic Coast Conference).

The Panthers (4-3, 1-2) led 10-7 after Ben Sauls’ 37-yard field goal late in the third quarter but couldn't extend it. Four turnovers didn't help, and Slovis was responsible for three, tossing two interceptions along with fumbling as he tried to pass.

Israel Abanikanda rushed 28 times for 129 yards, including a 12-yard TD run, after rushing for a school-record 320 yards against Virginia Tech last time out. The bulk of his yardage came in the first half, and he also had a 37-yard catch-and-run to set up Pitt's first touchdown.

His 36-yard run in the fourth put the Panthers on the Louisville 39, but they turned it over on downs. Louisville converted that opportunity into Turner's field goal.

“We didn’t make enough plays offensively,” Pitt coach Pat Narduzzi said. “When you put the ball on the ground, that just can’t happen. We’ve got to protect the ball better. Not going to win many ball games minus-3 (turnover margin) again.”

Brock Domann relieved Cunningham late in the second quarter, started the third and came in again in the fourth to set up an insurance field goal with a 28-yard sideline completion to Tyler Hudson.

He was just 2-of-5 passing for 35 yards but provided another big lift for Louisville after passing for 275 yards and one of his two TDs while guiding a 34-17 win at Virginia with Cunningham sidelined.

Pittsburgh: The Panthers outgained Louisville 326-312 but couldn’t get out of their own way with turnovers. The defense bottled up Cunningham for much of the game but was caught off guard by the receiver pass to Cunningham. With it went a chance for a second consecutive win.

Louisville: The Cardinals finally have a winning streak and can credit a defense that overcame giving up space to Abanikanda to limit him and the Panthers’ ground game. Those four turnovers made the obvious difference. The offense couldn’t seize those chances because of sluggish play at first but awoke in the fourth quarter and even converted a trick play to set up the key score.

“Stats ... I knew I would they weren’t going to be pretty in this game, if you think about it," coach Scott Satterfield said. "There were two stats that I thought we had to win. Number one was turnover margin, and we won that. And that was obviously the difference in the game. And number two was the explosive plays.”

Pittsburgh: The Panthers visit No. 22 North Carolina on Saturday.

Louisville: The Cardinals host No. 13 Wake Forest on Saturday.