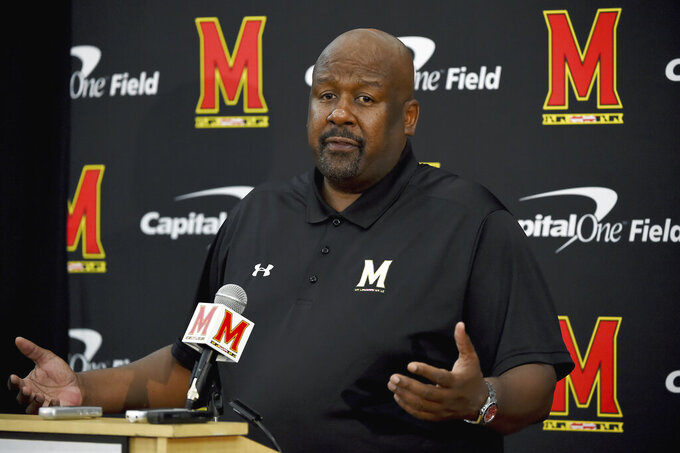 FILE - In this Aug. 2, 2019, file photo, Maryland head coach Mike Locksley addresses the media during a news conference before NCAA college football practice, in College Park, Md. Locksley launched the National Coalition for Minority Football Coaches a little more than a year ago, during a tumultuous summer of racial reckoning in the United States. The timing wasn’t part of Locksley’s plan. Long before the death of George Floyd sparked protests across the country, the veteran coach had envisioned an organization that could address a problem that has plagued college football for decades: A dearth of Black and other minority head coaches.(AP Photo/Will Newton, File)

Maryland coach Mike Locksley launched the National Coalition for Minority Football Coaches a little more than a year ago, during a tumultuous summer of racial reckoning in the United States.

Long before the death of George Floyd sparked protests across the country, the veteran coach had envisioned an organization that could address a problem that has plagued college football for decades: A dearth of Black and other minority head coaches.

While the spotlight has dimmed somewhat since amid the pandemic, the coalition is showing signs it was built to last and do more than just talk about the need for change.

Locksley said the coalition was regularly engaged during the last hiring cycle by colleges and NFL teams looking for candidates. A year later, the coalition has created a mentorship program, matching rising coaches with influential administrators, and is building a bank of analytics-based profiles that can be used to match potential candidates with specific openings.

“I think the first thing you have to establish is the credibility as an organization to where people know and understand who you are, what the goal, what the mission is.,” Locksley said. "And I think we did a really good job of branding ourselves as a entity that has the ability to be a resource for hiring and diversity in hiring."

NCMFC executive director Raj Kudchadkar, a civil rights attorney with extensive experience promoting diversity in businesses and schools, said the coalitiion wants to make sure the best candidates are selected, but noted it exists "because we want to diversify those applicant pools,”

“We always hear there's not enough qualified minority coaches out there. And quite honestly, there are,” Kudchadkar said.

An NCAA report released in March showed that when it comes to the hiring of minority coaches at the highest levels of college football there has been some progress over the last decade among coordinators and assistants.

Meanwhile, the percentage of minority players in FBS has grown from about 60% to more than 65% over the nine years covered by the NCAA's report.

Locksley said he hopes the coalition can break through a structure where media hype, booster influence and pre-existing relationships often determine who ends up being hired.

To that end, the first of what the coalition hopes will be numerous data-driven studies it has commissioned is expected to be released in coming weeks. Kudchadkar declined to share details of the first report, but did say it will be goal oriented.

“It's not going to be a 30,000-foot view that says, ”Hey, we have an issue here.' We already know that there's an issue," Kudchadkar said. "This is going to be a report that says: ‘This is the trajectory that we’re on. We need to change that trajectory and these are things that we need to look at.'"

Annual dues to join the coalition ranges from $50 to $250 for NFL coaches and membership has grown to more than 700. Illinois defensive coordinator Ryan Walters said it's been money well spent.

“Obviously, you have to be an expert at your craft, but it is an networking community,” Walters said. “So to get in front of and get around ADs and people who are making decisions on the hiring process is huge.”

Walters said what he has learned should help him advance in his career.

“The pros and cons of the interview process," he explained. "Things that guys did well and things that guys didn’t do well. What you need to be prepared for. What kind of questions you have to be able to answer. And sort of what turns off ADs in the hiring process.”

The broader conversation about racial inequities may be quieter than it was last year, but the 51-year Locksley knows this issue is evergreen.

“As I moved to what I call the back nine of my career and my give-a-crap gauge was on E, if I can create a pathway or something that makes it easier for the next group of Mike Locksleys coming through this profession, then I want to do that,” he said.