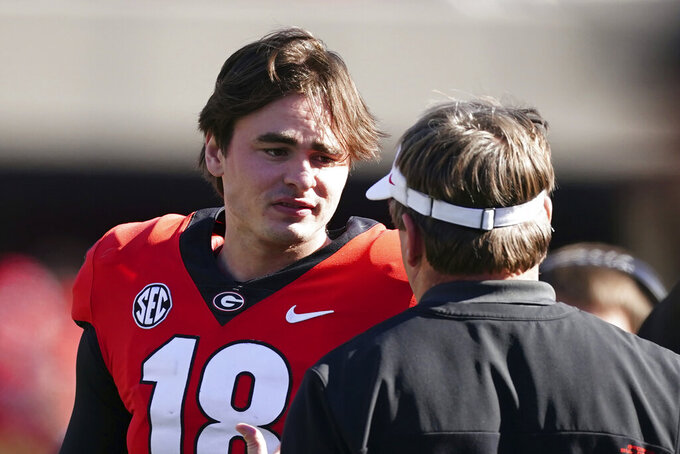 Neal Brown took himself out of the equation after West Virginia’s offense struggled last season.

The fourth-year coach handed play-calling duties in January to newly hired offensive coordinator Graham Harrell, who was prolific in the same role at Southern Cal and North Texas and as a quarterback under Mike Leach at Texas Tech. Last season the Trojans led the Pac-12 in passing and total offense.

West Virginia sure could use Harrell’s help. The Mountaineers were eighth in total offense in the Big 12 with an average of 371 yards and scored the second-fewest touchdowns.

“He’s brought a different energy about him,” Brown said. “He’s confident without being arrogant. He’s extremely humble. It helps that he was a great player in this league, and I think that gets the players’ attention on your current roster but also in recruiting. He’s been able to have success with different types of players and different types of offenses."

Harrell is being reunited with quarterback JT Daniels, who played one half at USC as a sophomore under Harrell in the 2019 opener before suffering a season-ending knee injury. Daniels announced in April that he was transferring to West Virginia from national champion Georgia, where he went 7-0 as a starter but lost his starting job last season.

Daniels is among four quarterbacks hoping to earn the starting job and replace two-year starter Jarret Doege, who entered the transfer portal in the offseason.

West Virginia, which has 33 new players on its roster, opens the season Sept. 1 at No. 17 Pittsburgh.

Brown is 17-18 with one winning season and has finished no better than a tie for fifth in the Big 12, so this could be a pivotal year for his job security. And it won't be easy with four ranked teams on the schedule. Another sub.-500 record would give West Virginia its worst stretch since four straight losing seasons under Frank Cignetti Sr. from 1976-79.

If there’s anything to get Brown back in impatient fans’ good graces, a win over the Mountaineers’ biggest rival in the season opener would be a start. The Backyard Brawl last was played in 2011 in the teams’ final season in the Big East.

“It’s been a great carrot for our guys as we’ve gone through winter, through spring ball, now through summer workouts to know that, man, we’ve got not only a game to look forward to but it’s a rivalry game that’s going to be in prime time,” Brown said.

West Virginia has all five starters back on the offensive line but lost three of its top five receivers to the transfer portal. Back are Bryce Ford-Wheaton and Sam James, who combined for 1,080 yards and eight touchdowns.

West Virginia also is thin at running back. Tony Mathis takes over after leading rusher Leddie Brown entered the NFL draft. Mathis ran for 327 yards and four scores a year ago. His two backups have a combined two carries in college.

“The pieces that are there, we really like,” said defensive coordinator Jordan Lesley.

Brown wants improvement on punt returns after West Virginia averaged 3.1 yards per attempt, which was last in the Big 12, and fumbled away two punts last season, one of which led to an Oklahoma State touchdown.

After playing Pitt, West Virginia has other Thursday night games Sept. 22 at Virginia Tech and at home Oct. 13 against No. 10 Baylor. Other ranked opponents include Nov. 12 at home against No. 9 Oklahoma and Nov. 26 at No. 12 Oklahoma State. The home and league opener is Sept. 10 against Kansas.