No. 12 Clemson looks to win ACC Atlantic outright vs. Cards 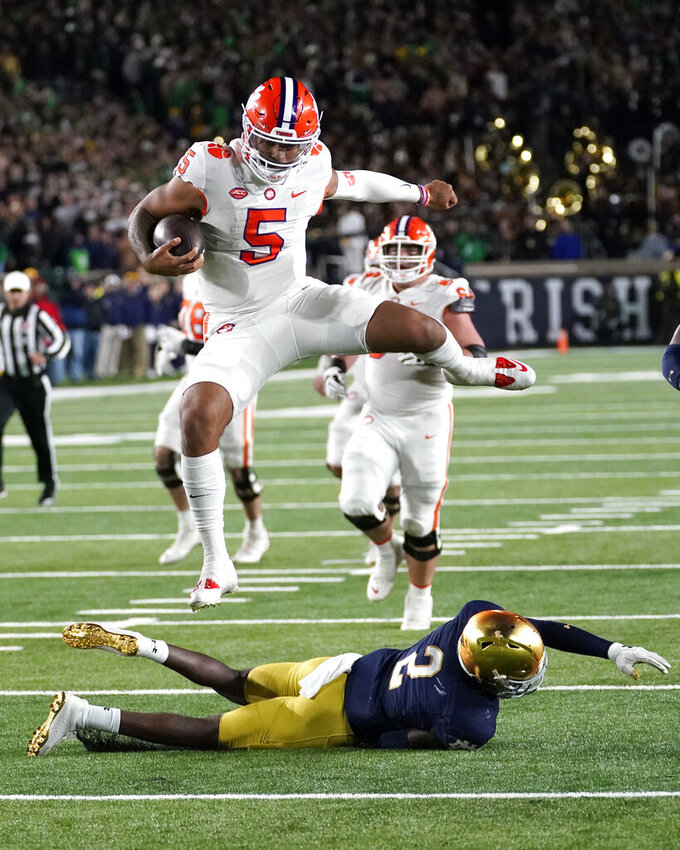 A chance for Clemson to win the ACC Atlantic Division outright and to remain, at least for now, in the conversation for the College Football Playoff. The Tigers earned the Atlantic's spot in the ACC title game with Syracuse's loss last week. Four of Louisville's losses to Clemson have come by a touchdown or less, including last year's 30-24 defeat.

Clemson QB DJ Uiagalelei vs. Louisville's pass defense. The Tigers' offense have struggled the past two games, and Uiagalelei has gotten benched in both, including the 35-14 loss at No. 20 Notre Dame. The Cardinals are fourth against the pass in the ACC and held James Madison to just 52 yards through the air in a win last week.

Louisville LB Momo Sanogo: The Ole Miss transfer recorded a career-high 13 tackles last week and leads the Cardinals with 60 tackles, 29 of those in the past three games.

Clemson RB Will Shipley: He has been the offense's most relentless force this season. When he was rendered ineffective by Notre Dame last week with just 63 yards, Clemson couldn't get its attack moving. Shipley must regain his footing for the Tigers to bounce back.

Clemson has won an ACC-record 38 straight home games. It can tie Oklahoma's 39 in a row at home from 2005-2011 for ninth longest such streak in FBS history. ... Louisville has salvaged its season with four straight wins and qualified for the postseason for the third time in coach Scott Satterfield's four seasons. ... Clemson has averaged 40.6 points a game in its seven games with Louisville, its highest total against any FBS opponent. ... Louisville QB Malik Cunningham has accounted for 119 touchdowns, tying the school mark set by Baltimore Ravens passer and Heisman Trophy winner Lamar Jackson. ... The Cardinals are second in the country with 3.7 seven sacks per game. They posted eight in a win over Wake Forest and seven in beating Virginia. ... Clemson is chasing its 100th victory over Power Five opponents since 2013, the most such wins in that stretch. ... Louisville is 25th nationally and third in the ACC in rushing at 201 yards per game.