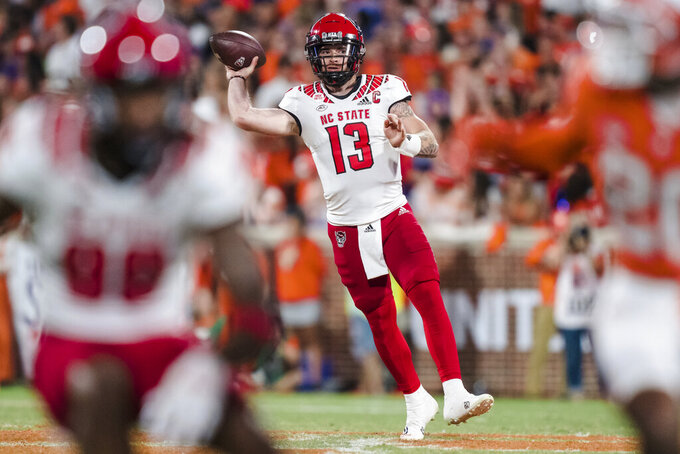 Line: N.C. State by 3, according to FanDuel Sportsbook.

N.C. State is coming off a loss at No. 5 Clemson that was a hit to its chances of winning the ACC Atlantic Division. The Wolfpack will need to bounce back and keep winning to stay within reach of the Tigers in the standings. The Seminoles are coming off a loss to No. 15 Wake Forest, knocking them out of the AP Top 25 and putting them in similar footing with a date vs. Clemson still ahead.

N.C. State receivers vs. FSU secondary. Much was expected of Wolfpack quarterback Devin Leary as the preseason pick for league player of the year, though the offense hasn't settled into a rhythm. Some of that has to do with the team losing top receiver Emeka Emezie from last year and the lack of a proven go-to threat downfield, which the team is still seeking. There could be an opportunity to find that against the Seminoles, who have already allowed eight touchdown passes in ACC play and allowed opposing passers to connect on 62.4% of their attempts.

FSU: QB Jordan Travis. Travis is pushing the ball downfield for the Seminoles. He leads the league and is tied for eighth nationally by averaging 9.7 yards per pass attempt, while his 14.77 yards per completion is an ACC high and 10th in the Bowl Subdivision ranks.

N.C. State: LB Payton Wilson. Wilson had his second big tackling performance since returning from an early season upper-body injury, racking up 11 stops against Clemson for a tough defense.

N.C. Sate has won four of the last five meetings. ... The Wolfpack outscored the Seminoles 82-17 in the first quarter of the last eight games in the series. ... The Seminoles are second in the league in total offense at 481.6 yards per game. ... FSU last won in Raleigh in 2016 and has lost the past two trips here. ... N.C. State has won 13 straight home games, the fifth-longest active streak in the country. ... Leary is two touchdown passes away from tying for third in the program's all-time list (63). ... FSU was ranked No. 23 in last week's AP Top 25 poll.