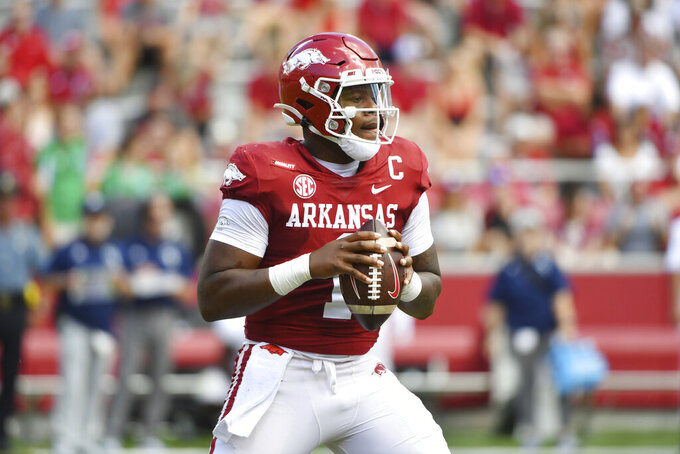 No. 7 Texas A&M (3-0) plays No. 16 Arkansas (3-0) in Arlington, Texas. The matchup of former rivals in the Southwest Conference should go a long way into shaping the Southeastern Conference West Division in the league opener for both clubs. The Aggies have dominated the series with nine straight wins the past decade. They've won their past 11 games dating to last season and are seeking their first 4-0 start since 2016, when they won their first six games. It will be a step up in opponents for new quarterback starter Zach Calzada. The sophomore stepped in for injured passer Haynes King and began to find his game last week in a victory over New Mexico State as he threw for 275 yards, three touchdowns and an interception in the Aggies' win. Arkansas' pass defense comes in 12th in the country, giving up just 142 yards a game in the team's best start in five years. Defensive end Tre Williams had four tackles in last week's 45-10 win over Georgia Southern, including two behind the line of scrimmage. These schools played each year from 1934-1991 as SWC opponents before Arkansas left for the SEC. Texas A&M joined them in the league in 2012.

LSU will look to show its back on track when it opens SEC play at Mississippi State. Mike Leach's team topped the Tigers, then defending national champs, in a 44-34 victory in Baton Rouge, Louisiana, a year ago. LSU stumbled out of the gate this season with a loss at UCLA to fall out of the rankings. The Tigers have since their last two over McNeese State and Central Michigan by a combined score of 83-28. Quarterback Max Johnson threw for 372 yards and five touchdowns — just the fifth QB in program history to accomplish that. Mississippi State has allowed 243 yards a game through the air, 92nd in the country.

LSU leads the country with 19 sacks and 40 tackles for loss. Defensive end BJ Ojulari leads the team in both categories with 4 1/2 of each. ... Georgia's dominant defense finally gave up a touchdown this season after keeping Clemson and UAB out of the end zone. South Carolina broke the string with a fourth quarter TD in a 40-13 Bulldogs victory. ... No. 1 Alabama continued its run of scoring 30 or more points. The streak grew to 29 in a row after a 31-29 win at No. 11 Florida last week. The Crimson Tide's stretch is the second-longest in major college football history, only behind UCF's 31 straight from 2017-19. ... When the Gators host Tennessee, it's a matchup of the country's second-best rushing attack (Florida is averaging 335 yards on the ground per game) against the nation's fifth-best at stopping the run (Tennessee has held opponents to 54.3 yards a game). ... Kentucky is at South Carolina, and the Wildcats are hoping to open SEC play at 2-0 for the first time since 1977. ... Auburn runner Tank Bigsby has reached 100-plus yards rushing in all three games to lead the SEC. He's averaging 7.3 yards an attempt this season.

Southern Mississippi visits No. 1 Alabama as 44 1/2 point underdogs, according to FanDuel Sportsbook. The Crimson Tide have won the past seven in the series, including the past two with Nick Saban as coach, by a combined score of 101-17. It's the first time Southern Miss has played a team ranked No. 1 in the AP poll since facing Bear Bryant's Alabama club in 1980. That didn't go well for the Golden Eagles, who fell 42-7. Even worse for Southern Miss, you can bet Saban will want to crank up his offense, which misfired at times in Alabama's 31-29 win at The Swamp.

Arkansas' Bumper Pool and Jalen Catalon. Pool is the senior linebacker currently leading the SEC with 30 tackles, while teammate Catalon in the secondary is right behind with 28. It's no surprise that the Razorbacks are off to a 3-0 start and second in SEC pass defense. Arkansas will need both Pool and Catalon sharp going up against Texas A&M this weekend. The Aggies are averaging almost 253 yards a game passing.

This story has been corrected to show that Alabama faces Southern Mississippi, not South Alabama.