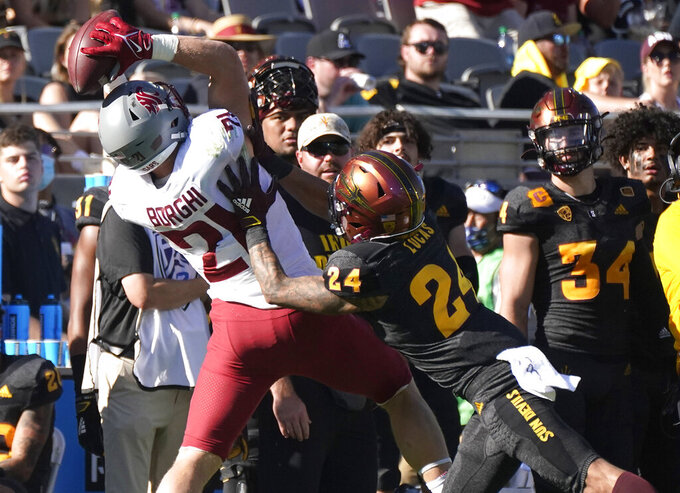 Washington State running back Max Borghi (21) hauls in a pass over Arizona State defensive back Chase Lucas (24) during the second half of an NCAA college football game, Saturday, Oct 30, 2021, in Tempe, Ariz. (AP Photo/Darryl Webb)

TEMPE, Ariz. (AP) — Washington State was counted out when its head coach and four assistants were fired for refusing the state's vaccination mandate. No way could the Cougars recover from adversity like that.

They showed a bit of moxy in a loss to BYU last week and took it a step further against Arizona State behind an opportunistic defense.

““Ultimately, we know what we have in our building,” Washington State edge rusher Ron Stone, Jr. said. "We have what we need in our building to be successful, so there was never any doubt.”

The Cougars (5-4, 4-2 Pac-12), one of the nation's best at creating takeaways, were at their ball-hawking best in the first half, forcing four turnovers. Washington State's offense capitalized, scoring 24 points after Arizona State turnovers for its first win since coach Nick Rolovich and four assistants were fired on Oct. 18.

“By no means did we play the underdog card,” Washington State acting head coach and defensive coordinator Jake Dickert said. “We're confident in our ability, confident in what we can do and we're playing good football at the right part of the season.”

Arizona State is not.

The Sun Devils (5-3, 3-2) got off to an abysmal start coming off a bye week, turning it over on their opening three drives, including twice in the first three plays.

“Our players maybe took this home venue for granted, thinking maybe we play at home everything's supposed to work out,” Arizona State coach Herm Edwards said. “Well, it doesn't always work out when you turn the ball over five times, drop balls and give up some big plays in the passing game. We have a lot of fixing to do.”

The worst part was the Sun Devils had an extra week to regroup after giving up 28 second-half points in a 35-21 loss to Utah on Oct. 16.

They could have used another week off.

Arizona State bumbled its way through the first half, following the three opening turnovers by turning it over on downs at Washington State's 18-yard line and missing a 32-yard field goal after a false start negated a made one.

A holding penalty also wiped out Daniels' 56-yard touchdown run and Daniyel Ngata lost a fumble on the next play.

Daniels finally gave Arizona State a glimmer of hope in the final seconds of the first half, throwing a 12-yard TD pass to LV Bunkley-Shelton. That cut Washington State's lead to 28-7.

Any chance at momentum ended when Daniels threw a lob that went right to Washington State's Jaylen Watson in the third quarter.

“It's very frustrating because that's something we harped on all week,” Daniels said. “We put the defense in bad positions. We can't expect the defense to hold up for four quarters if we're going to just keep giving Washington State the ball.”

While Washington State's defense was creating turnovers, the offense was picking apart the Sun Devils.

The Cougars were stopped on downs after the first turnover, but de Laura scored on a 1-yard run then dropped a 28-yard pass over a defender to Travell Harris for a 28-yard touchdown.

Dean Janikowski kicked a 40-yard field goal after Daniels' second interception to make it 31-7 in the third.

Jackson certainly did, catching seven passes for a career-best 139 yards and a touchdown.

“He's been inspiring all season,” Dickert said. “CJ has done a good job of giving us that extra spark. He's that 1-2 punch with Travell.”

Washington State's defense created the opportunities and its offense capitalized, keeping the Cougars in the mix for the Pac-12 North title despite losing their head coach less than two weeks ago.

Arizona State's bid to win the Pac-12 South took a big hit after consecutive duds. The Sun Devils were outscored by a combined 56-0 in the second half against Utah and the first half against Washington State before Daniels' TD pass to Bunkley-Shelton in the closing seconds.