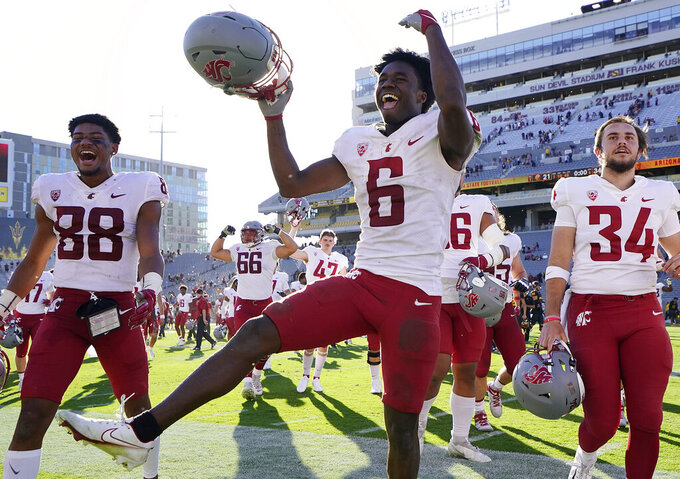 The fifth-ranked Oregon Ducks continue a march toward the Pac-12 title game, and perhaps a playoff berth, at home against Washington State on Saturday night. Oregon (8-1, 5-1) was No. 3 in the latest College Football Playoff rankings. A win over the Cougars, combined with a Stanford victory against Oregon State, would give Oregon the Pac-12 North crown and a spot in the conference championship game. The Cougars (5-4, 4-2) are coming off a 31-24 win at Arizona State and sit in second place in the North Division. Despite the turbulence over the dismissal of coach Nick Rolovich, the Cougars are just one win from bowl eligibility.

Stanford at Oregon State. Like the Cougs, the Beavers need just one more victory to be bowl eligible, but they fell 37-34 in overtime last weekend to Colorado. Hosting the Cardinal might be the best chance Oregon State (5-4, 3-3) has to secure a postseason spot: the Beavers also play Arizona State at home before facing Oregon in Eugene to wrap up the regular season. Stanford (3-6, 2-5) has just three overall wins this season, but one of them came against the formidable Ducks. The Cardinal are coming off a discouraging 52-7 loss to Utah last weekend.

Utah (6-3, 5-1) can clinch the South Division with a win over Arizona and a Washington win over Arizona State. The Wildcats have not been able to beat the Utes since 2015 in Tucson. ... Saturday's game between California and USC has peen postponed because of a coronavirus outbreak in Berkeley. The game has been rescheduled for Saturday, Dec. 4. ... Stanford has won the last 11 games against Oregon State. ... UCLA, coming off a bye, faces Colorado and looks for its first win at home since beating No. 16 LSU back in September. A victory would make the Bruins bowl eligible for the first time since 2017.

Travis Dye ran for a career-high 211 yards and a touchdown against Washington last week as Oregon racked up a season-high 329 yards rushing. Dye has rushed for 438 yards and eight touchdowns in four games since fellow running back CJ Verdell was ruled out for the rest of the season because of injury. Dye ranks second overall in the Pac-12 with an average of just over 91 yards rushing per game.

Arizona State at Washington. The Huskies (4-5, 3-3) are in disarray. Head coach Jimmy Lake has been suspended for the game. Offensive coordinator John Donovan was relieved of his duties on Sunday. So what better way to make things more confounding than a victory over the Sun Devils? Arizona State (6-3, 4-2) has won 11 of the last 13 against the Huskies, but the teams haven't met since 2018. The Dawgs have won the last two games in Seattle. The Sun Devils are 5 1/2-point favorites.