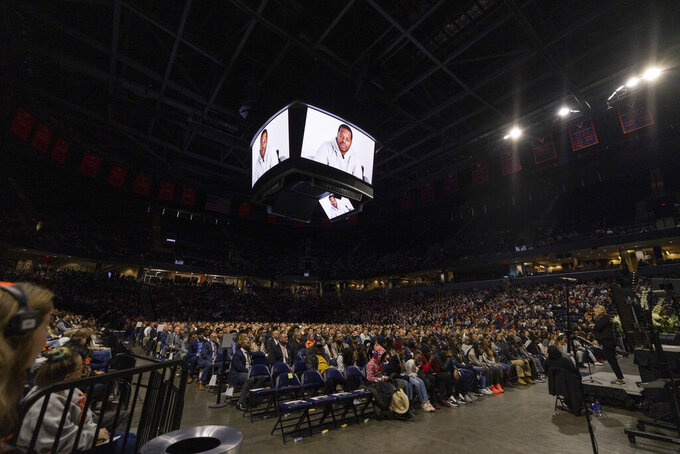 CHARLOTTESVILLE, Va. (AP) — Virginia's football team will travel to its third funeral in five days Wednesday to honor the life of Lavel Davis Jr., who was fatally shot on a bus along with two teammates after they returned to campus from a field trip.

Davis, 20, and teammates D’Sean Perry and Devin Chandler were killed Nov. 13 after returning from the trip to see a play in Washington, D.C.

Authorities have said Christopher Darnell Jones Jr., a UVA student and former member of the football team who was on the trip, began shooting at students on the bus as it pulled to a stop at a campus parking garage.

The team, which opted to cancel its final two football games after the killings, attended Perry's funeral in Miami on Saturday and Chandler's in Virginia Beach on Sunday.

The victims' lives were celebrated at a memorial service in the John Paul Jones Arena on the Virginia campus on Nov. 19. More than 9,000 attended the nearly two-hour service.

Athletic director Carla Williams vowed “we will make sure their legacies never fade at the University of Virginia.” Football coach Tony Elliott said, “Only time will reveal God’s purpose in this adversity” and said he's certain the three are “rejoicing in paradise."

Jones, 23, faces second-degree murder and other charges stemming from the shooting, which set off a manhunt and 12-hour campus lockdown before Jones was apprehended in suburban Richmond. Jones is being held without bond.

Robert Kraft, the owner of the NFL’s New England Patriots, has provided a private plane for the Virginia football team's funeral travel.