Alabama using bye week to do ‘quality control on every unit’ 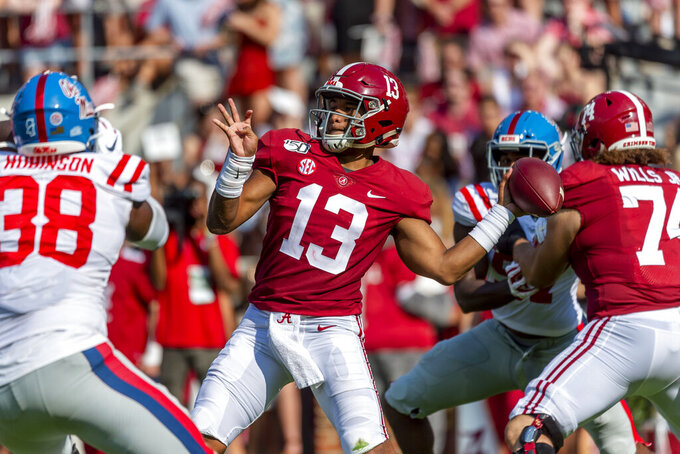 MONTGOMERY, Ala. (AP) — Being ranked No. 1 and trying to avoid complacency is hardly new for Alabama.

The Crimson Tide rose to the top of the rankings ahead of the team’s first open date after a five-game stretch of easy wins over unranked opponents.

Bigger challenges lie ahead for the Tide, and there remains plenty of room for improvement ahead of a visit to No. 25 Texas A&M on Oct. 12. That’s especially true on a freshman-heavy defense.

Off the field, Alabama’s Nick Saban said coaches talk about avoiding the external hype, or clutter, “just about every day.”

“You kind of ignore some of those things because I think humility is very important to paying attention to detail and doing things the right way,” Saban said. “I don’t think it really matters at all where you’re ranked or rated right now. It only matters when it’s January when the season’s over. That’s all that matters.

“And it can slip away very, very quickly, and as it did this last week, it wasn’t even because the team didn’t win. It must’ve been somebody’s perception of how they played. So, it’s not even about winning. It’s about how you play.”

Alabama jumped ahead of defending national champion Clemson in the rankings following a 59-31 win over Mississippi, coupled with Clemson’s squeaker over North Carolina. It’s the 12th straight year Alabama has spent time at No. 1.

The Tide learned a harsh lesson after dominating the regular season last year only to fall to the Tigers in a lopsided national title game. The offense has continued to flourish behind quarterback Tua Tagovailoa while the defense has understandably been enduring some growing pains.

Thanks mostly to injuries, four Alabama defensive starters on the front seven were in high school a year ago. Plus, safety Jordan Battle has started two games and on offense, left tackle Evan Neal also is a freshman.

The Tide has an extra week of practice to work with those youngsters. The defense has appeared more vulnerable than usual, especially against Ole Miss. The Tide ranks seventh in the Southeastern Conference in total defense and eighth against the run.

Alabama still has games against No. 5 LSU and at No. 7 Auburn ahead.

Saban said he wasn’t particularly pleased with the team’s effort when it returned to practice Tuesday, but that it did improve. He called the team’s attitude “a work in progress.”

“I think obviously young players probably have a little bit more room relative to their knowledge and experience and how they can sort of benefit from having this extra time.”

Alabama is counting on it.