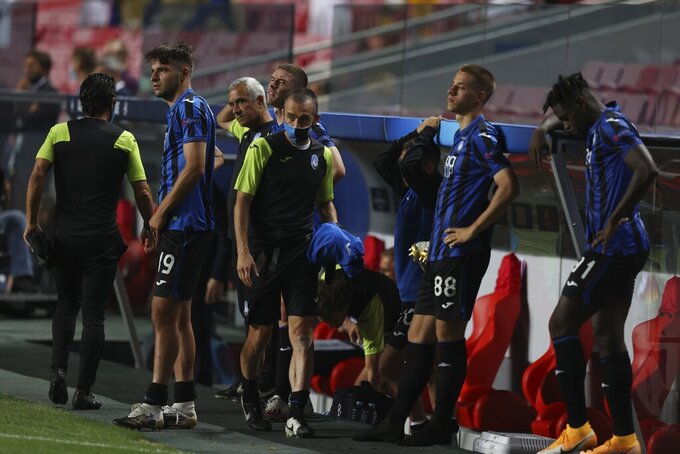 The Italian upstart's chance of winning the Champions League was ended by two very late goals as Paris Saint-Germain beat it 2-1 in the quarterfinals on Wednesday in Lisbon.

A semifinal appearance in its debut season in Europe’s biggest club competition proved a step too far for the modest club from Bergamo, a city devastated by the coronavirus pandemic.

But Atalanta expects the experience to serve it well next season after qualifying again for the Champions League through another club-best third-place finish in Serie A.

“I barely slept last night,” Atalanta president Antonio Percassi said on Thursday. “But we have to be happy for the performance against a really strong club.

“This is a great lesson. We went to the university of football here and they are all important events because they will help the guys mature, these are new experiences for them, too.”

The remarkable campaign earned Atalanta a stack of cash, and while the club's history makes it unlikely to splash out, at least it will have more options in the transfer market.

Atalanta coach Gian Piero Gasperini is keen to hold onto the club’s more important players after the Champions League run threw them into the spotlight, garnering attention from Europe’s bigger clubs.

“Now that we have finished this tour de force, we have until the beginning of the season to understand where we can intervene. Always thinking of the conditions of a club like Atalanta, we will do everything to improve,” Percassi said.

He added the players will be rewarded for their endeavor.

“We don’t want to lose any of our big players but if a crazy offer comes in we will do the necessary evaluations. But our plan is to create continuity and reinforce the squad where possible and improve.”

One of the club’s first targets will be to find a player similar to key forward Josip Iličić, the team's top scorer this season with 21, including five in the Champions League. He missed the quarterfinal due to personal problems.

“He would be the first great buy, everything is being done to have him back as soon as possible,” Percassi said. “The news is positive and we are optimistic. Finding a player like him is not easy, but we are looking for a ‘vice- Iličić.'"

Atalanta also want to continue its tradition of bringing through homegrown talent. That was seen on Wednesday when 19-year-old midfielder Jacopo Da Riva was sent on less than two weeks after his senior professional debut.

“The fact that a boy from our youth ranks played in the most important match in Atalanta’s history is representative of what we are trying to do,” Luca Percassi, Antonio’s son and the club CEO, said.

“We’re happy. We think we have six or seven boys with enormous potential and the quicker they mature the quicker they can help this group that in the past few years has proved itself. That’s Atalanta’s philosophy and we are proud of that.”

Atalanta also hopes to be able to play its Champions League matches next season at its own stadium. The Gewiss Stadium is undergoing lengthy renovations after failing to conform to UEFA regulations. The team's “home” this season was San Siro in Milan.

There will be a UEFA inspection on Sept. 7-8.

If they get their home back, their fans might also be allowed to attend. The small city of Bergamo was one of the epicenters of the virus outbreak in Italy. More than 6,000 people died with COVID-19 in the province.

Images of a convoy of military trucks driving coffins out of the city because the crematorium couldn’t keep up were beamed around the world.

None of the Atalanta players left the city even during one of the most severe lockdowns in the world, and they constantly talked about bringing joy back to their supporters.

“The people of Bergamo were hit hard and wounded, Atalanta helped return their smiles a bit and make them think of something else for an hour and a half,” Percassi senior said. “We are also Bergamaschi, it was a hard and difficult period for all of us.

“Everything we have done we dedicate to our city. This season will go down in history, we have broken all of the club’s records and we did so with the emotional involvement of a population which didn’t deserve everything that happened.”

The dream lives on.