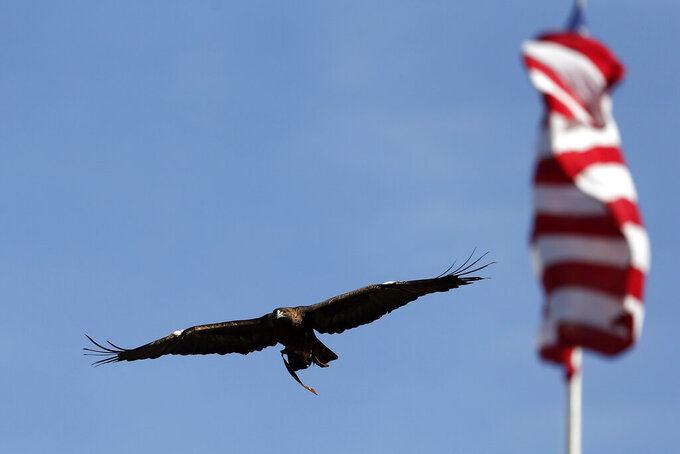 FILE- In this Nov. 14, 2015 file photo, Auburn's eagle, Nova, flies around the stadium before the start of an NCAA football game between Auburn and Georgia, in Auburn, Ala. Auburn University announced Friday. Nov. 22, 2019, that it is retiring its 27-year-old golden eagle mascot two years after it was grounded from flying at football games because of heart disease. (AP Photo/Butch Dill, File)

AUBURN, Ala. (AP) — Auburn University is retiring its 20-year-old golden eagle mascot two years after it was grounded from flying at football games because of heart disease.

A university statement issued Friday says the bird named Nova is being replaced by another golden eagle named Aurea that will become War Eagle VIII.

A ceremony marking the transition is planned for Auburn’s home football game against Samford University on Saturday. Nova has been sidelined since 2017 after being diagnosed with cardiomyopathy, which is a chronic heart disease.

A statement by veterinarian Seth Oster says Nova will mostly be restricted to presentations at the university’s raptor center.

Aurea is a 5-year-old female with a more than 6.5-foot (1.9-meter) wingspan. Aurea was brought to the raptor center in 2016 with an injured wing.