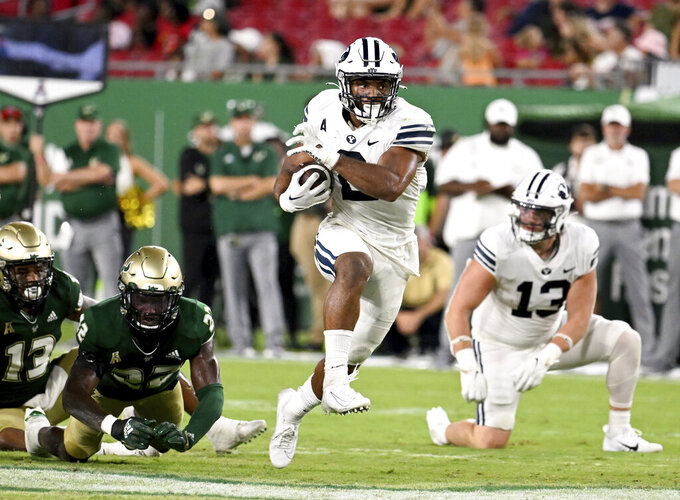 BYU running back Christopher Brooks (2) runs for a 52-yard touchdown during the second half of the team's NCAA college football game against South Florida on Saturday, Sept. 3, 2022, in Tampa, Fla. (AP Photo/Jason Behnken)

Line: BYU by 3 1/2, according to FanDuel Sportsbook.

Baylor and BYU meet as nonconference foes for the final time, with the Cougars set to join the Big 12 next season. The Bears won last season 38-24 in Waco, Texas, on their way to a 12-win season that included a conference championship and a Sugar Bowl victory. The Bears beat the University at Albany 69-10 in their opener. The Cougars are coming off a 50-21 win at South Florida. BYU has a 6-8 mark against ranked teams under coach Kalani Sitake, including 4-3 at LaVell Edwards Stadium.

BYU QB Jaren Hall spread the ball around by completing passes to 12 different targets in a win over South Florida. He finished with 261 yards, two touchdowns and one interception. The Bears are an opportunistic defense and have forced a turnover in 23 straight games. LB Bryson Jackson had a fumble recovery against Albany.

Baylor: A four-back rotation of Craig Williams, Taye McWilliams, Qualan Jones and Richard Reese paved the way against Albany. Reese led the charge with 62 yards and two scores. They’re trying to step in for Abram Smith, who ran for a program-record 1,621 yards last season.

BYU: LB Payton Wilgar had five tackles in the season opener. He played in 10 games a year ago before suffering a season-ending injury. Wilgar still finished third on the team in tackles and had two interceptions.