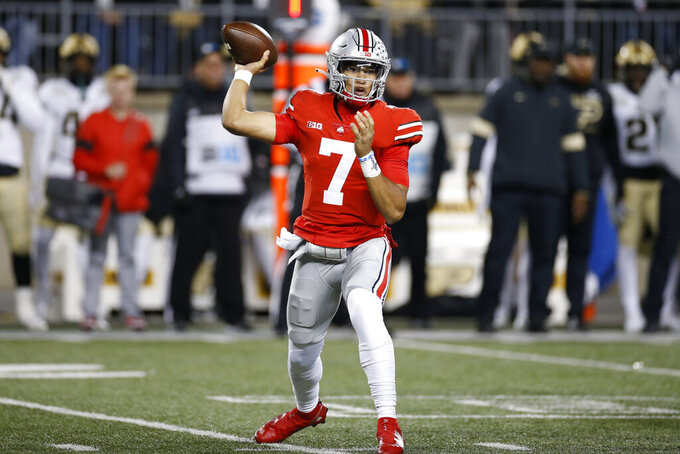 Things to watch during Week 12 of play in the Big Ten Conference:

No. 7 Michigan State at No. 5 Ohio State

Michigan fans must do what does not come naturally for them Saturday: root for Ohio State (9-1, 7-0). The Wolverines' secondary rival, Michigan State (9-1, 6-1), can take control of the East Division race with a win at the Horseshoe. That would give the Spartans the head-to-head tiebreaker against Michigan and Ohio State regardless of what happens in their regular-season finale against Penn State. If the favored Buckeyes beat Michigan State, it would set up an Ohio State-Michigan showdown at the Big House for a berth in the Big Ten championship game, assuming No. 8 Michigan (9-1, 6-1) wins at Maryland (5-5, 2-5) this week.

The Wolverines' pass defense is allowing just 5.9 yards per attempt, tied for second-best in the conference, and has allowed just one touchdown the past four games. Their last two opponents have completed just 49% of their passes. Tagovailoa and Ohio State's C.J. Stroud are the only Big Ten QBs throwing for more than 300 yards per game, and those two and Michigan State's Payton Thorne are the only ones with 20 or more TD passes. Tagovailoa's big numbers haven't translated into wins. The Terrapins have lost five of six.

Nebraska (3-7, 1-6) is an 8 1/2-point underdog at Wisconsin (7-3, 5-2), according to FanDuel Sportsbook. The No. 19 Badgers are on a six-game win streak, have won seven straight in the series and are in pursuit of a fifth appearance in the Big Ten championship game since the conference went to its East-West alignment in 2014. The Cornhuskers are out of bowl contention and coach Scott Frost fired four offensive assistants last week, so it's not a stretch to think they could be in mail-it-in mode. If the Huskers are fully engaged, they're dangerous. They haven't lost any game by more than nine points and have been especially tough against ranked opponents.

Illinois RB Chase Brown heads into a visit to No. 18 Iowa (8-2, 5-2) with at least 145 rushing yards in each of his last two road games. A similar performance probably would give the Illini (4-6, 3-4) a chance. The Hawkeyes are allowing just 3 yards per rushing attempt but have allowed a 100-yard rusher in two of their last three games.