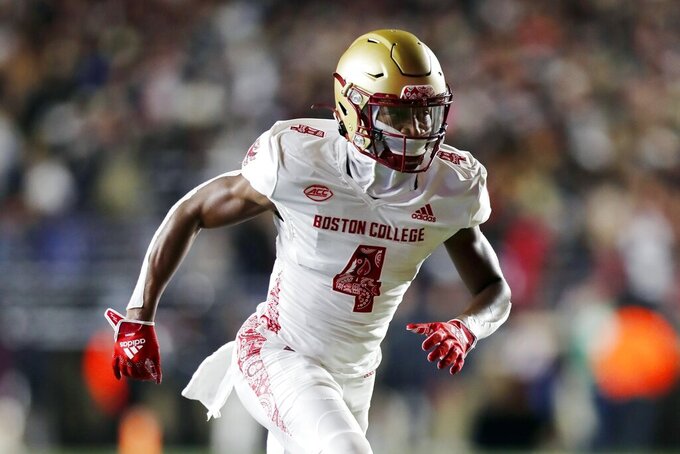 BOSTON (AP) — Boston College tackle Jack Conley looks over his shoulder at the fieldhouse wall, where the school has hung the jerseys of its NFL first-round draft choices.

Three of the last four have been offensive linemen.

“BC football, the weakness will never be the O-Line,” Conley, one of the five new offensive lineman expected to start for BC this season, said at media day on Monday. “And it’s going to stay that way.”

As the Eagles get ready for their Sept. 3 opener against Rutgers, they are flirting with a dangerous combination: The offensive line is inexperienced, and quarterback Phil Jurkovec has yet to complete a full, healthy season.

With so much depending on the Notre Dame transfer, the Eagles are counting on the line coming together quickly.

“The first priority when I got here was to keep him upright,” said offensive coordinator John McNulty, who arrived in Chestnut Hill from Notre Dame this season. “Whatever we have to do. That’s kind of where everything has to come from. To protect the quarterback has to be real. We can’t just expose him to as many hits.”

BC has sent more than a few stars to the NFL, from Pro Bowl quarterbacks Matt Ryan, Matt Hasselbeck and Doug Flutie to defensive standouts Luke Kuechly, Art Donovan and Fred Smerlas.

But many of the school’s pro prospects have been offensive linemen, including 10 of its 21 NFL first-round draft picks. Four members of last year’s line are in NFL camps, including guard Zion Johnson, the No. 17 overall pick by the Los Angeles Chargers.

“We have such a rich history of O-line play. No one comes here and doesn’t want to be one of those guys,” Conley said. “We want to add on to the history. And we don’t want to let down what’s come before us and lower the standard for what is to come in the future.”

The lone member of last year’s line who returned to campus was guard Christian Mahogany, a favorite to be on the preseason All-ACC first team before tearing his ACL this spring. Alec Lindstrom, the younger brother of Falcons 2019 first-round draft pick Chris Lindstrom, has signed with Dallas, tackle Tyler Vrabel is with Atlanta and guard Ben Petrula is with Cleveland.

It may be that the next NFL prospect to graduate from "O-Line U" is among those trying to protect Jurkovec this year, a group that is expected to include Conley, Ozzy Trapilo, Drew Kendall, Kevin Cline and Finn Dirstine.

“We are known for having great O-Linemen. And putting them out in the first round,” receiver Zay Flowers said. “So I believe that we’re going to be just fine.”

Jurkovec, who transferred from Notre Dame in 2020, hurt his knee near the end of his first season at BC and then last year broke a bone in his hand in Week 2. He was expected to miss the rest of the season, but made a surprise return in November.

The former Pennsylvania high school phenom says he doesn’t consider himself injury prone; last year’s injury was “a fluke thing,” when he put his hand down on the ground. But he’s also working on ways to minimize the abuse to his body.

Though running is a big part of his success — he picked up 322 yards and five touchdowns on the ground in six games last year — he knows there are times he should step out of bounds or even bail out on a play rather than take a hit.

Jurkovec said he’s also working on his sliding. (“I would say my sliding is subpar,” he said.)

“I think I’ve just been reckless at times before,” he admitted. “I’ve got to minimize the amount of hits that I take.”

But a lot of that will also come down to how well the offensive line can protect him.

Conley acknowledged that it's a fair question.

But not a weakness.

“A ‘question mark’ is fine, because that means we get to prove it. But a ‘weakness’ means we’re put off to the side, and that we’re pulling the team down,” he said. “And we won’t let that happen.”