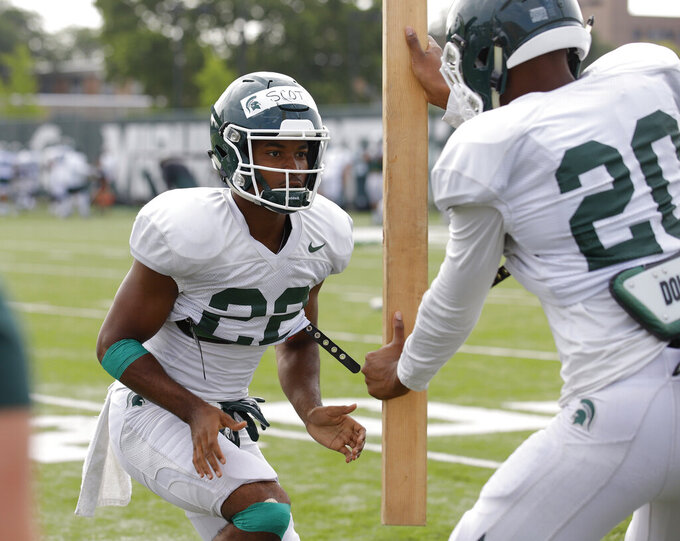 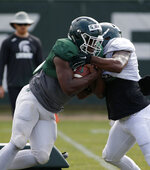 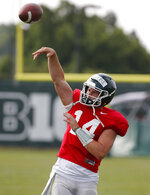 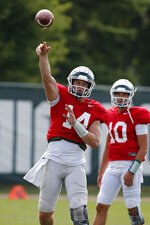 EAST LANSING, Mich. (AP) — Seven months ago, Mark Dantonio shook up his offensive staff, keeping his assistants but switching their roles around.

It was a move that reflected the state of the Michigan State program — not necessarily panicking, but certainly aware of some recent shortcomings.

The Spartans went 7-6 last year, and that record was fitting because it felt like several games could have ended with that exact score. The Redbox Bowl actually did — Oregon beat the Spartans 7-6 — and that merely confirmed what had been obvious for a while: Michigan State's offense was a mess.

Dantonio shuffled his staff in an attempt to recapture some of the success his team had in the not-too-distant past. Michigan State won the Big Ten and made the College Football Playoff in 2015, but after that, the Spartans had one terrible season (3-9) and one good one (10-3) before ending up somewhere in between in 2018.

"We've had some great moments. We want those again," Dantonio said. "We want to chase those down and become part of that."

Of course, coaching alone won't improve an offense that was next to last in the Big Ten in scoring. The players will need to execute. Quarterback Brian Lewerke was impressive in 2017 but took a step back last year, throwing for eight touchdowns with 11 interceptions.

It's an oversimplification to say that this coming season depends on Lewerke, but he's certainly under scrutiny — because of his position and the way his performance varied over the past couple years.

Michigan State ranked No. 1 in the Big Ten in scoring defense last season, allowing an average of only 17.2 points. That was despite a pedestrian plus-1 turnover margin.

"We stopped the run and played pretty good on third down. We were difficult to score on. Of course, you want to continue to get better in those areas, but I think what we'd like to see is our turnover margin be better," Dantonio said. "When you look at us in '13 and '14, and I think '15, we led the Big Ten in turnover margin."

Indeed, Michigan State finished at plus-13 in 2013, plus-19 in 2014 and plus-14 in 2015. Given the uncertainty on offense at the moment, it would obviously help if the defense can put Lewerke and Co. in as many favorable situations as possible.

The defensive line figures to be a strength for Michigan State again. Raequan Williams and Kenny Willekes both received first-team All-Big Ten honors from the AP last year. They're back, although Willekes is returning from a broken leg he went down with in the Redbox Bowl.

The Spartans were hoping to feature an impressive running game last year led by senior LJ Scott, but he injured his ankle in September and had only 79 carries in his final season at Michigan State. Connor Heyward rushed for 529 yards and five touchdowns. La'Darius Jefferson had 78 carries, although he averaged only 3.3 yards per attempt.

The Spartans have three of their biggest league games on the road this season — against Ohio State on Oct. 5, Wisconsin on Oct. 12 and Michigan on Nov. 16. Michigan State does get Penn State in East Lansing on Oct. 26 and Arizona State at home Sept. 14. The Spartans open at home Aug. 30 against Tulsa.