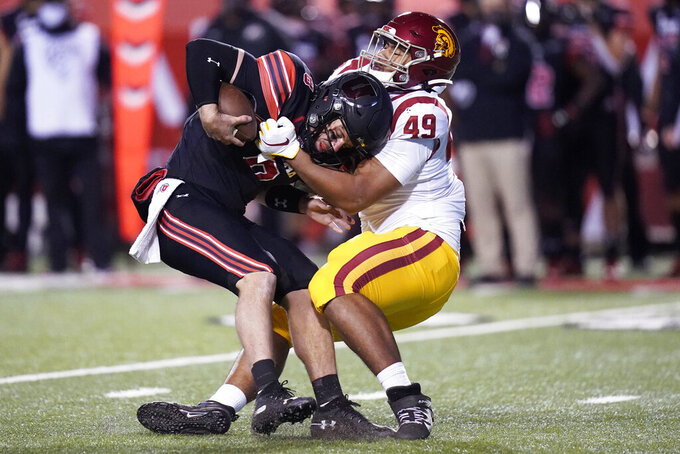 Cousins Talanoa Hufanga and Marlon Tuipulotu would anchor the defense as third-year starters at safety and nose tackle, respectively, and younger brother Tuli Tuipulotu was making enough plays in camp to show he could contribute as a freshman defensive tackle.

“I told Marlon, joking around the second Tuli started to take off, I said, ‘You got any more brothers, younger brothers, cousins, anybody that plays football? Because considered them offered (scholarships) if they do,’” Orlando said.

Together, Hufanga and the Tuipulotu brothers have helped the No. 13 Trojans reach the Pac-12 title game against Oregon on Friday.

The value of the trio for USC (5-0) was never more evident than in the thrilling 43-38 comeback win against UCLA on Saturday. Hufanga had a staggering 17 tackles with two tackles for loss, an interception and a forced fumble. Tuli Tuipulotu made nine tackles, including 1 1/2 tackles for loss with a sack, and Marlon Tuipulotu helped clog up the middle in several critical short-yardage situations.

“The athlete is one thing, and all three of them are super talented guys,” Orlando said. “But to me, the internal … I mean, these guys are five-star, seven-star guys internally in terms of their want to, their work ethic, their character. And it doesn’t surprise me that all three guys are playing well.”

Hufanga’s performance over the past month has been exceptional. He has an interception in four straight games, becoming the first USC player with such a streak since 1996. After failing to record a pick through his first 19 college games, Hufanga is tied for fifth-most interceptions in the FBS.

While the interceptions have finally come, and in bunches, Hufanga’s overall production remains as solid as ever. He leads USC in tackles (50), solo tackles (30) and forced fumbles (2), and his 3 1/2 tackles for loss are tied with Marlon Tuipulotu for third on the team.

“During the offseason I just wanted to try to step up my game in total,” Hufanga said. “I definitely still have a lot to work on all-around, and a big emphasis this year just for our whole team is just to run and hit and create turnovers. I gotta make the most of all my opportunities I get. At the end of the day, I just want to help our team win any way possible.”

Marlon Tuipulotu is still a force on the line, commanding double teams and creating chances for others to make plays.

But it is the 6-foot-3 Tuli Tuipulotu who has emerged as the big surprise. He has 20 tackles, 2 1/2 tackles for loss and two sacks in the past four games.

“I did not expect him to be the tallest one out of all of us,” Hufanga said. “He’s the little brother, he’s taller than both of us.”

Getting another big performance from Hufanga and the Tuipulotu brothers would go a long way towards USC winning its second Pac-12 title in the 10 seasons since the conference adopted a title game. Issues with ball security and pass protection have hurt Oregon (3-2) in its past three games, as the Ducks committed six turnovers and allowed seven sacks of quarterback Tyler Shough, so there should be opportunities for the three Trojans to make their mark.

For Hufanga, playing the Ducks has special meaning. A native of Corvallis, he hasn’t played against Oregon or Oregon State in his college career. A broken collarbone denied him a homecoming game against the Beavers in 2018 and a sprained shoulder kept him out against the Ducks last season, so he has been “dreaming of this opportunity.” Playing at the Coliseum for a championship makes it even more special.

Orlando credits the leadership of Hufanga and Marlon Tuipulotu in pushing USC to win the Pac-12 South, their familial bond leading the defense through unusual circumstances.

“They hold a lot of things together and they’re able to communicate that because deep down in their heart they know the way we’re doing things leads to these opportunities we’re going to have in a couple days,” Orlando said.