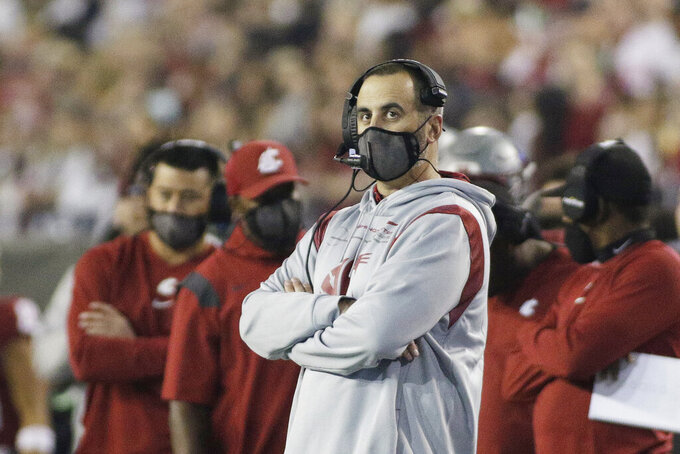 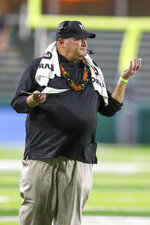 The last time Portland State traveled to Pullman, the FCS program upset a Washington State team that went on to win nine games in 2015.

The Vikings (0-1) will try it again Saturday, while Washington State (0-1) seeks to recover from a late collapse that led to a loss against Utah State in the Cougars' season opener. The Cougars squandered a 12-point fourth-quarter lead in a 26-23 loss. They also lost starting quarterback Jarrett Guarantano to an unspecified injury in the second quarter when he was sacked in the end zone for a safety.

“I know we lost and he could have done some better things, but he definitely brings some energy,” Rolovich said of de Laura, who started all four of the Cougars' games last season. “I thought he was mature in his decisions, in his presence.”

De Laura completed 12 of 22 passes for 155 yards and a touchdown, while rushing for 42 yards on seven attempts. He fired a 12-yard scoring strike to Donovan Ollie in the third quarter.

Portland State, a member of the Big Sky Conference, is 4-41 all time against FBS teams, but Rolovich said his players must take the Vikings seriously.

If he were the Portland State coach, "I’d make (the Vikings) believe there’s a wounded animal up in Pullman and we’ll go finish them off," Rolovich said. "It’s on us to heal and flush it, bury the dead and move on.”

Portland State fell behind 28-0 in the first quarter at Hawaii last weekend but outscored the Rainbow Warriors 35-21 the rest of the way in the 49-35 loss.

“This team has grit," Portland State coach Bruce Barnum said. "The leadership on this football team won’t allow them to quit. They could have folded after that start, but they didn’t. I’m not concerned about the future of this group.”

The Vikings had their best season in program history in 2015, when they opened by beating Mike Leach's Cougars 24-17 in Pullman under Barnum, who was then in his first season at the school. It was their first win ever over a Pac-12 program. Portland State went 9-3 that year and lost in the second round of the playoffs. But the Vikings are 12-33 over the past four years.

Portland State senior quarterback Davis Alexander is a three-year starter who has thrown for 6,140 yards and 42 touchdowns against just 19 interceptions in his career. He's also rushed for 1,094 yards and 19 scores. “He’s exciting. He’s in control. He throws with confidence,” Rolovich said. Alexander has plenty of talented receivers, as well.

BATTLE OF THE DEFENSES

While the Cougars defense allowed Utah State to score a pair of late touchdowns to win last Saturday, the unit was pretty stout for most of the day. They limited Utah State to just one field goal in the first half and forced two takeaways. Meanwhile, Portland State's defense surrendered 620 yards against Hawaii — including 315 on the ground. That should be good news for star Washington State running back Max Borghi.

Washington State has announced that, starting in October, fans will be required to show proof they are fully vaccinated against COVID-19 or present a negative test within 72 hours of game day if they want to attend a game in Pullman. Proof of vaccination will be required for fans ages 12 and up.