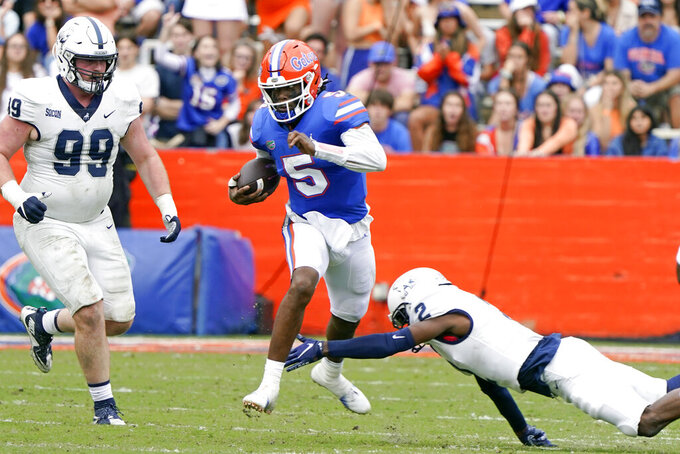 Florida quarterback Emory Jones (5) scrambles for yardage as he gets past Samford defensive tackle Seth Simmer (99) and cornerback Coutrell Plair, right, during the first half of an NCAA college football game, Saturday, Nov. 13, 2021, in Gainesville, Fla. (AP Photo/John Raoux)

GAINESVILLE, Fla. (AP) — Florida coach Dan Mullen is sticking with quarterback Emory Jones for Saturday’s game at Missouri and probably the rest of the season.

Jones is coming off a record-setting performance in a 70-52 victory against lower-division Samford. He completed 28 of 34 passes for 464 yards and six touchdowns. He also ran for 86 yards and a score.

His 550 total yards broke Tim Tebow’s school record of 533 set in the 2010 Sugar Bowl against Cincinnati.

“It was fantastic,” Mullen said Monday. “It was so huge for Emory to just sit up there and just consistently perform time after time after time. To go and set the top performance for a quarterback in the history of Florida football, that is a pretty special deal, right?

“There’s a lot of great players and a lot of football played around here. When you sit atop the record book as a quarterback here at Florida, that’s a special deal.”

Mullen refused to even acknowledge that Jones’ success came against a middle-of-the-pack team from the Southern Conference that has the 122th-ranked defense (out of 123) in the Football Championship Subdivision. Only Texas Southern is ranked worse.

“We had a young guy set the all-time record in the history of Florida football,” Mullen said. “I don’t know that there’s a bigger narrative. That’s got to be a bigger narrative since … when? Tim Tebow. That’s a pretty big thing.”

Mullen benched Jones during a 49-42 loss at LSU last month, turning to redshirt freshman Anthony Richardson. Richardson played well and started the following week against top-ranked Georgia. He threw two interceptions and fumbled before getting knocked out of the lopsided loss with a concussion.

Richardson sprained a knee the following week dancing in the hotel the night before playing at South Carolina. Richardson, who dealt with injuries in high school, also missed two games earlier this season following a strained right hamstring.

Jones started against the Gamecocks despite dealing with flu-like symptoms all week and played with a sprained thumb on his throwing hand. He got the nod again against Samford.

“I feel good about how I’m playing, but there’s a lot of improvement to be made," Jones said. "We still have a couple games left, so that’s all I’ll keep trying to do. Us as a team, as an offense, we still have to try to go out here, have a great week of practice, go out there and perform on Saturdays.”

Now, it seems, it’s his job to lose moving forward.

“Emory’s been playing really well,” Mullen said. “I’m not going to say we might not have a good package or something to get Anthony in there. I’m still putting the plan together. But hopefully he’s fully available.”