G5 teams could have fewer chances vs. P5 after realignment 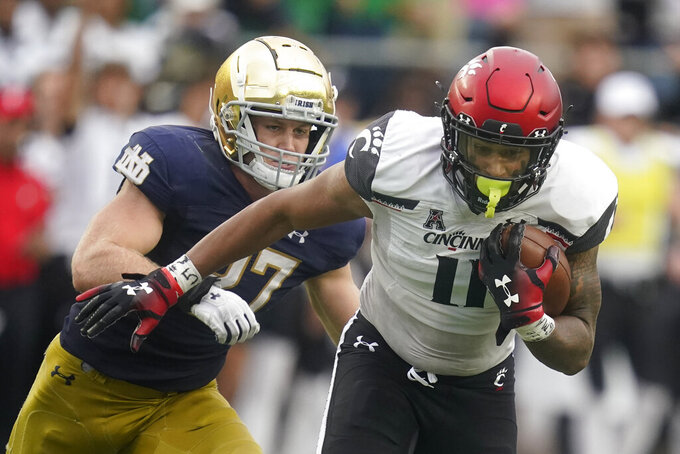 FILE - Cincinnati's Leonard Taylor (11) is chased by Notre Dame's JD Bertrand (27) during the second half of an NCAA college football game, Saturday, Oct. 2, 2021, in South Bend, Ind. Cincinnati won 24-13. Cincinnati set itself up to become the first Group of Five team to make the College Football Playoff by winning at Notre Dame. (AP Photo/Darron Cummings, File)

Cincinnati set itself up to become the first Group of Five team to make the College Football Playoff by winning at Notre Dame.

While the Bearcats fulfilled their playoff aspirations last year — they had to win every regular-season game to even be in consideration for the four-team CFP — the games most G5 and Football Championship Subdivision schools play against the Power Five teams are about the paycheck they get to help finance their programs.

“The obvious reason is financially. It’s a good payday,” said Middle Tennessee State coach Rick Stockstill, whose Blue Raiders have played 38 games against current P5 teams over the past 16 seasons, first in the Sun Belt and now Conference USA.

But with the Southeastern Conference and Big Ten both set to expand to at least 16 teams over the next few seasons, and the other Power Five leagues going through their own transitions that include the addition of some current G5 teams, there could be fewer openings for such games.

“I’d hate for those to go away because I think to keep college football going and keep it where it is ... that level’s important too,” said Pittsburgh coach Pat Narduzzi, whose team will play FCS Rhode Island, his alma mater. “It may go away. I think it depends on how many teams are in these conferences. ... That’s way down the road, I guess. I don’t know how far down the road."

Of the 60 teams now in the Group of Five leagues — American, Conference USA, Mid-American, Mountain West and Sun Belt — only FIU and North Texas aren’t scheduled to play a Power Five team this season, while 26 of them will play multiple P5 opponents. MAC team Kent State is the only team with three, making trips to Washington, Oklahoma and defending national champion Georgia.

There are 85 scheduled P5 vs. G5 games this season, five more than last year but still fewer than the 92 played in 2019. The Big Ten, Pac-12 and SEC played conference-only schedules in 2020 because of the COVID-19 pandemic, with the ACC and Big 12 limited to one non-league game.

Even with two departures, the Big 12 will grow with the additions next summer of independent BYU, along with Cincinnati, Houston and UCF from the American.

The Big 12 has played a round-robin schedule as a 10-team league, but might cut from nine to eight conference games, as could the revised Pac-12, with those extra spots potentially used for other P5 games. The ACC, which among major conferences plays the highest percentage of non-league P5 games and lowest percentage of G5 opponents, plans to maintain its eight-game conference slate through at least 2026.

Middle Tennessee, which has played as many as three SEC teams in the same season, goes to Miami on Sept. 24.

“I haven't seen anybody say they're going to play 12 conference games. ... So there’s three, there’s four slots available that we can still have the opportunity to play those Power Five schools,” said Stockstill, who still relishes the opportunity for his guys to show they can compete against the “so-called best players” in those games.

“I like to show a tremendous amount of respect to Group of Five teams too because there’s been some great ones. Everything is cyclical, right? And you never know when a team is going to hit its stride," Cristobal said. "So there’s a lot of quality football teams out there that may not be Power Five teams. And I think those should be considered (when scheduling), as well as a big-stage opportunity.”

An undefeated record alone wouldn't been enough for Cincinnati to make the playoff. But the Bearcats had the opportunity last season to play Notre Dame for the first time since 1900, and Big Ten team Indiana — and beat both on the road.

Only 15 of the 131 FBS teams won’t play an FCS team this season. The SEC is the only P5 league with all of its teams playing at least one G5 school and a game against a lower-division FCS team.

Bethune-Cookman is one of five SWAC teams that will play a P5 team, but Commissioner Charles McClelland said his growing league of historically black colleges and universities doesn’t necessarily have to play those step-up games because of corporate and media partners that have improved the league's financial position.

“Now, there’s a difference in needing to play and wanting to play," McClelland said. "I am not concerned about them wanting to play. I just want to make sure that from a revenue perspective our schools don’t need to play.”