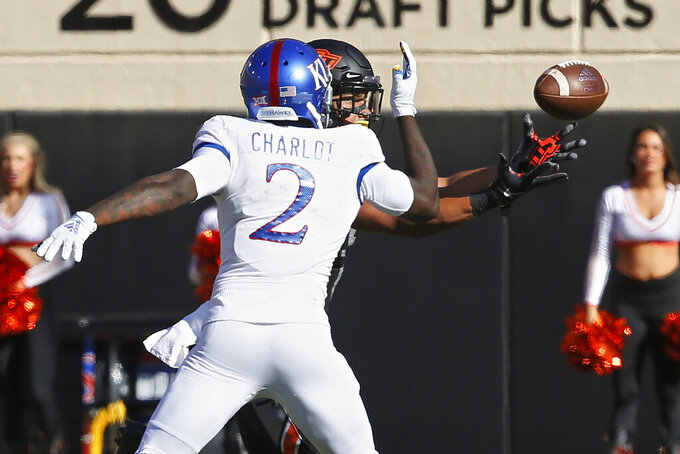 STILLWATER, Okla. (AP) — No. 22 Oklahoma State gets a lot of attention for its dynamic offense that features the nation’s leading rusher, Chuba Hubbard, but the Cowboys’ defense also has been outstanding lately.

In addition to holding each of its last three opponents to 27 points or fewer, Oklahoma State (7-3, 4-3 Big 12, No. 22 CFP) has generated 10 total turnovers, including four interceptions and a fumble recovery from sophomore safety Kolby Harvell-Peel, in those games.

After the Cowboys’ defense forced just three interceptions and four fumbles through their first seven games, the flood of turnovers in the last three outings has been crucial to them emerging with three straight victories.

The next week against TCU, Oklahoma State had another three interceptions, two from Harvell-Peel, who also recovered a fumble, to secure a 34-27 triumph.

And then following a bye week, the Cowboys prevailed 31-13 over Kansas on Saturday, with Harvell-Peel again snagging two of the three Oklahoma State interceptions.

Gundy cited two key factors in the Cowboys’ improved defensive performance the last few weeks. He praised the job that second-year defensive coordinator Jim Knowles has done, while noting that the team has gotten some important players bothered by nagging injuries back on the field.

“Our guys are playing well,” Gundy said. “I think that Coach Knowles and the staff are starting to get a little more accustomed to this league, in the schemes and the different style of play that we have. I think that’s getting instilled in the players.

“And the other thing you have to remember is, we had some serious issues health-wise early in the year. We really couldn’t function as well, as we were trying to make some adjustments throughout the season. Last week was the first week that we really had two-deep that could practice full speed, so they’ve done a nice job just keeping their head above the water, with not having a lot of guys to practice with the first six or seven weeks of the season.”

Of course, Harvell-Peel in particular has been instrumental to that recent success, being named the Big 12 Defensive Player of the Week on Monday for the second time in three weeks (and third time this season). Overall, Harvell-Peel is tied for fourth in the nation with five interceptions, is third on the Cowboys with 60 tackles and is tied for third in the country with 16 passes defended, including a single-game school record of six in the Iowa State game.

“He’s always around the ball when it’s on the ground or it gets tipped,” Gundy said. “It’s crazy. He’s just in the right place at the right time a lot, but he also capitalizes on it. Some young men don’t make those catches.”

Gundy believes Harvell-Peel should be a shoo-in for the All-Big 12 team and possibly even an All-American.

“I don’t think now, with his numbers, there’s any question (he’s all-conference), I think he might have even more than that,” Gundy said. “It’s pretty phenomenal for the position he plays. We’re proud of him, he’s worked hard.”

Knowles considers Harvell-Peel one of the squad’s defensive leaders.

“He has great football intelligence,” Knowles said after the Kansas game. “He is a guy who can pick my brain at practice. He understands offensive and defensive schemes. Defense is a lot about momentum and attitude. We have a lot of momentum right now, and we’ve got to keep it up. Kolby is our leader for sure.”