Mike Sainristil's switch to CB at Michigan proves to be wise 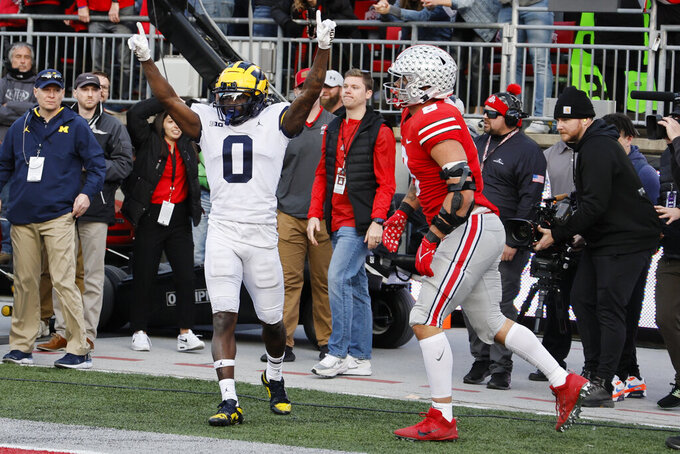 Michigan defensive back Mike Sainristil celebrates breaking up a pass against Ohio State tight end Cade Stover during the second half of an NCAA college football game on Saturday, Nov. 26, 2022, in Columbus, Ohio. (AP Photo/Jay LaPrete) 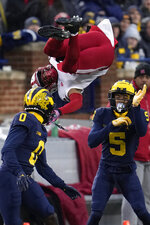 ANN ARBOR, Mich. (AP) — Mike Sainristil, whose family fled Haiti when he was an infant and raised him in suburban Boston, wanted to have the ball in his hands to make plays at receiver when he chose to attend Michigan.

Sainristil got his wish, scoring touchdowns in each of his first three seasons and emerging as a dependable player on offense last season when the Wolverines won their first Big Ten title since 2004.

Jim Harbaugh asked Sainristil last spring to switch to cornerback and it has proved to be a win-win move.

“The way this year is going, I can make plays on defense, too," Sainristil said.

The second-ranked Wolverines (12-0, 9-0 Big Ten) will likely line up Sainristil at times against standout receiver Charlie Jones on Saturday night when they face Purdue (8-4, 6-3) in the conference championship game in Indianapolis.

“New week. New mindset. New opponent,” Sainristil said Monday. “It’s time to hit that reset button. We’re currently where we want to be, but we know that in order to get where we want to go, it starts on Saturday.

“We can’t get to the playoffs, we can’t win the national championship without winning the Big Ten championship.”

Michigan is coming off a win over rival Ohio State on the road for the first time since 2000 to reach the conference championship game for a second straight season due to a slew of key plays.

One of Sainristil's pass breakups might have been the most pivotal play during the game on a third down from the Michigan 9.

Buckeyes tight end Cade Stover had his hands on the football in the end zone until Sainristil used his closing speed and strength to break up the pass with his left hand. That forced Ryan Day to settle for a field goal, cutting Ohio State's deficit to eight points midway through the fourth quarter.

Sainristil finished with seven tackles — one shy of his career high — and two pass breakups in the 45-23 win in the Horseshoe, where he put a Michigan flag on the block “O" at midfield.

Harbaugh said the senior is one of many players on the team that made a personal sacrifice for the good of the team.

“Easily could have been another guy, `I'm a great receiver. I'd rather get more targets than take on the challenge of changing positions,'" Harbaugh said. “Anything for the team. Changed positions. Voted captain. He's been phenomenal and had a phenomenal game, his best game of the year."

Sainristil has been one of Michigan's most steady players on defense this season. He has 48 tackles, including 4 1/2 for losses and two sacks, and has broken up seven passes.

Over his first three seasons, he made 36 receptions for 532 yards and five touchdowns along with occasionally returning kickoffs and punts.

Sainristil can stay in college for another season, taking advantage of the NCAA granting an extra year of eligibility for any student-athlete who endured the COVID-affected 2020-21 school year, or he can take his versatile talents to the NFL.

“If I’m an NFL scout looking at myself, I’m looking at someone who is willing do anything for the team, a team captain, a guy who can play offense, defense and special teams," he said. “I’m hoping that my film speaks for itself when that time comes for my name to be called.

“As far as next year goes, I’m not sure. I haven’t decided what I’m doing. I’m just still focused on what’s in the present moment and that’s helping Team 143 be the best it can be and Purdue on Saturday.”