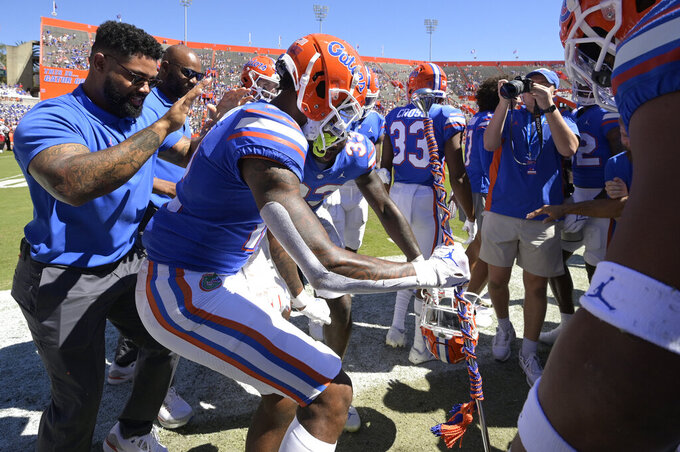 Florida wide receiver Caleb Douglas (12) celebrates with a drum major mace on the sideline after scoring a touchdown during the second half of an NCAA college football game against Eastern Washington, Sunday, Oct. 2, 2022, in Gainesville, Fla. (AP Photo/Phelan M. Ebenhack)

Line: Florida by 10 1/2 according to FanDuel Sportsbook.

Either Missouri or Florida will get its first conference victory. The Tigers are coming off consecutive nail-biters against Auburn and No. 2 Georgia. They missed a short field goal at the end of regulation that would have beaten Auburn and squandered a 10-point lead in the final 10 minutes against Georgia. Missouri’s most recent league win came last November against the Gators, a 24-23 stunner in overtime that prompted Florida to fire coach Dan Mullen the following day. The Gators have dropped six straight in SEC play.

Missouri coach Eli Drinkwitz vs. Florida’s Billy Napier. Drinkwitz is 2-0 against Napier, with both meetings coming in the Sun Belt Conference in 2019. Drinkwitz was coaching Appalachian State; Napier at Louisiana-Lafayette. Both head coaches also are offensive play-callers for their teams.

Missouri: LB Ty’Ron Hopper, who transferred from Florida in January, has 32 tackles and ranks second in the SEC with 7 ½ tackles for loss. He trails only Alabama star Will Anderson. Hopper and his cousin, DL Tyrone Hopper, both landed at Missouri after entering the portal. Tyrone had been at North Carolina.

Florida: QB Anthony Richardson has at least one turnover in four consecutive games. The dual-threat quarterback has flipped between fantastic and flawed from week to week and even series to series. He played sparingly last week against lower-division Eastern Washington and should have fresh legs against the Tigers.

Missouri’s Harrison Mevis is the only kicker in the Football Bowl Subdivision with three field goals from beyond 50 yards. He’s hit from 52, 52 and 56. He’s tied for first nationally in attempts per game (2.6) and tied for third in makes per game (2.0). … Mizzou’s Dominic Lovett leads all SEC receivers in yards (460), yards per game (92.0) and total receptions (27). … Florida’s six-game skid in SEC play matches the program’s longest since losing 11 in a row between 1945-48. The Gators also dropped six straight in 1979 and between the 2017-18 seasons. … Florida has scored in 428 consecutive games, an NCAA-record streak that began in 1988.