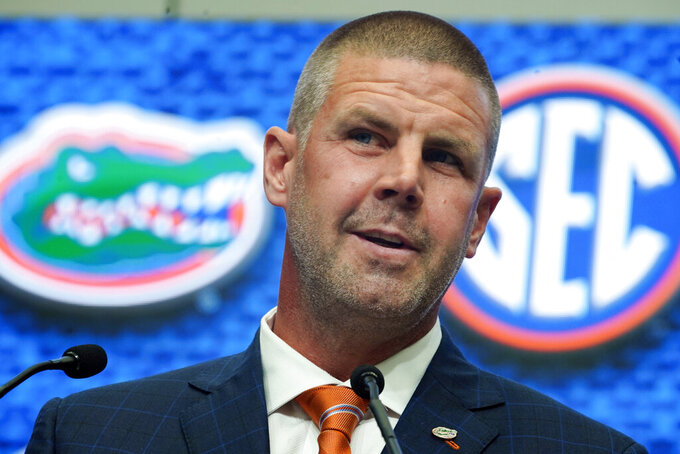 Napier’s recruiting prowess has been on display the last two months, culminating with the Gators’ 2023 class breaking into the top 10 in national rankings by Rivals and 247 Sports. The latest bump coincided with Florida opening an $85 million facility that was years in the making and should help get the program back on level footing with the Southeastern Conference heavyweights.

The key now is preventing it from becoming one step forward, two steps back once the season begins. The Gators open with seventh-ranked Utah in Gainesville on Sept. 3, followed by a visit from No. 20 Kentucky. It’s the first time since 1982 that Florida starts with back-to-back ranked opponents.

Coming off a 6-7 season that included the firing of coach Dan Mullen in November, Florida begins the Napier Era outside The Associated Press College Football Poll for the fourth time in the last decade — a clear sign of how far Florida has fallen in recent years.

A former assistant under Nick Saban at Alabama and the head coach at Louisiana-Lafayette the last four years, Napier is tasked with the latest rebuild. The Gators are confident he’ll do better than predecessors Will Muschamp, Jim McElwain and Dan Mullen.

“When your standards and expectations are much higher than anyone on the outside could have for you, I think that gives you an opportunity,” Napier said.

Napier’s state-of-the-art facility should help. Not only will it provide a much-needed recruiting tool, it should streamline the program’s day-to-day operations and improve time management.

Football players and fellow Florida student-athletes will share a portion of the 142,000-square-foot facility, which includes dining options, lounge areas, a resort-style swimming pool, a large hot tub, a basketball court, a barber shop, a virtual reality simulator, a recording studio, a game room and a golf center.

The rest of the Heavener Training Center is reserved for the football program. Players and coaches will have access to a 13,000-square-foot weight room and training area, a locker room featuring personalized stalls that cost roughly $5,000 each, a 20-table training room and dozens of staff offices.

“They did this thing the right way,” Napier said. “You’re talking about every bell and whistle.”

While the payoff likely will come down the road, the facility should have little effect on this year’s team. Florida is replacing more than 30 players from 2021, with most of them leaving for the NFL or opportunities elsewhere.

Dynamic quarterback Anthony Richardson seemingly has untapped potential — one website projects him as a top-10 NFL draft pick in 2023 — but he also has one career start and finished last season with six touchdown passes and five interceptions while playing behind Emory Jones.

So Napier has work to do. But at least he will get to do it in style, with the new building being the centerpiece of Florida's current makeover.

“You’re losing any and every excuse because that whole building is really impressive head to toe,” said strength and conditioning coordinator Mark Hocke, whose resume includes stops at SEC stalwarts Alabama, Georgia and Texas A&M. “That’s going to get us in the ballpark or conversations to where that can be the premier facility in college football. And at the end of the day, if you want to be the best, that’s what your resources need to be, too.”

Napier, however, is the first to start with a ranked opponent.

Florida is returning players who scored 14 of the team's 53 touchdowns a year ago. Quarterback Anthony Richardson and receiver Justin Shorter top the list with three apiece.

The over/under on Florida's win total in 2022 is 7, according to FanDuel Sports. The Gators' schedule includes conference games against Tennessee, Missouri, LSU, No. 3 Georgia, sixth-ranked Texas A&M, South Carolina and Vanderbilt, as well as a trip to rival Florida State.