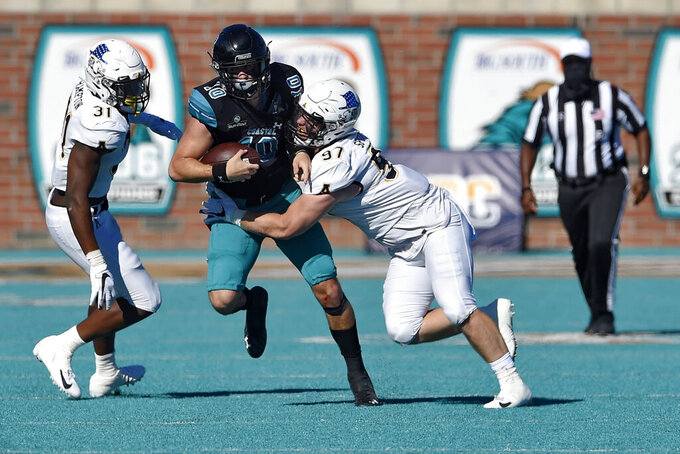 CONWAY, S.C. (AP) — Coastal Carolina has come a long way in a short amount of time.

After being picked to finish last in the Sun Belt Conference's East Division in the preseason coaches poll, the Chanticleers grabbed control of the division with a 34-23 win over Appalachian State on Saturday.

“For us to be 8-0 and one step closer to clinching the eastern division, if you had told us that at the beginning of the season, nobody would have believed that,” coach Jamey Chadwell said. "Hopefully, this is not the top moment of the year. Hopefully, we’ve got more.”

Coastal’s victory wasn’t secure until Reese White’s 3-yard touchdown run with 2:24 to go gave the Chants their third and final lead of the game. D’Jordan Strong picked off a pass on the ensuing possession and returned it for a touchdown to clinch it.

The Chants (6-0 Sun Belt Conference) had lost all six previous games to the four-time defending Sun Belt champion Mountaineers (6-2, 4-1). But they held Appalachian State to just two field goals in the second half after falling behind 17-9 at halftime.

The Mountaineers tried to rally after White’s score. But D’Jordan Strong intercepted Zac Thomas’ pass on fourth-and-22 and returned it 38 yards for a touchdown to clinch it.

Coastal Carolina is now a victory away from winning the league’s East Division and playing West winners Louisiana-Lafayette for the conference title next month.

The Chants play at Texas State next week and a make-up of a COVID-19-postponed game at Troy on Dec. 12. In between is a potential undefeated showdown against No. 22 LIberty on Dec. 5.

Coastal Carolina freshman quarterback Grayson McCall threw for 200 yards and two touchdowns and rushed for another 69 yards and a score. Wide receiver Isaiah Likely had 118 yards receiving and a score, and the Chants’ defense forced three turnovers, all interceptions, off the usually steady Thomas.

Likely caught a 75-yard TD pass from McCall on Coastal's first possession. “I looked at the defense and told them ‘I got y’all. Be ready. I’m going to score,' " he said.

Peoples continued to do his thing throughout most of the first half. Prior to the break, he rushed for 171 yards. It was the first time all season Coastal Carolina had allowed anybody to eclipse the 100-yard plateau.

Peoples couldn’t keep it up in the second half. He added just seven more yards on his final seven carries.

“It was just a few guys not being in their gaps here and there,” said senior defensive tackle C.J. Brewer after notching a career-high 14 tackles. “But we didn’t really change too much.”

It was mistakes and missed assignments that cost the Mountaineers, coach Shawn Clark said. “I thought all three phases made mistakes today,” he said.

If Coastal wins its final three regular-season games, it could lead to a New Year’s Six bowl appearance. More immediately, though, the Chants know that they need to win only one of their two final conference games to lock up a berth in the Sun Belt championship game.

A spot that previously has been taken by Appalachian State.

“They’ve been the king of the mountain for a long time. They’ve been the cream of the crop,” Chadwell said. “For us to beat them for the first time, have the best Sun Belt start ever and beat their record, that means a lot.”

Appalachian State: The Mountaineers almost assuredly lost out on a chance to play in the Sun Belt title game. The Chants would need to lose both of their final two conference games to open that door. However, they remain on solid footing for a bowl berth.

Coastal Carolina: The Chants are expected to improve upon their No. 15 ranking as they inch up for the chance to play in a New Year's Six bowl game.

Just hours before kickoff, the game was moved to ESPN from ESPN2 due to the last-minute cancellation of Clemson’s game at Florida State. It was the third time this season the Chanticleers have been on the primary ESPN broadcast, joining the team’s Sept. 18 game against Campbell and the Oct. 14 game at Louisiana.

Defensive lineman C.J. Brewer wants even more, lobbying for the network to bring its College GameDay set to Conway.

With every win, Chadwell is mentioned more and more for potential jobs at bigger schools. Most notably, he has been mentioned at the current opening at the University of South Carolina.

Chadwell has not shied away from the conversation. In fact, he addressed it head-on again after Saturday’s victory.