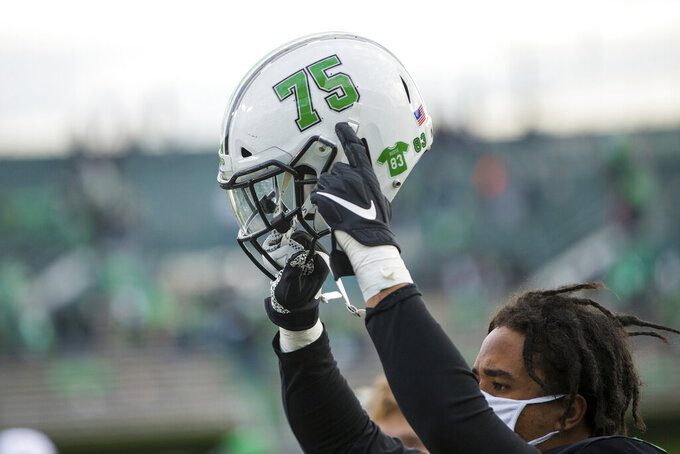 A Marshall player points to a "75" decal after the team's win over Middle Tennessee during an NCAA college football game Saturday, Nov. 14, 2020, in Huntington, W.Va. (Sholten Singer/The Herald-Dispatch via AP)

HUNTINGTON, W.Va. (AP) — Quarterback Grant Wells grew up knowing the story of Marshall football. The 1970 plane crash. The university's decision to continue playing. The winning years that eventually would come.

And the importance of representing the school and honoring the fallen on the crash's big anniversary.

The redshirt freshman threw a season-high five touchdown passes and No. 16 Marshall commemorated the 50th anniversary of the worst disaster in U.S. sports history with a 42-14 victory over Middle Tennessee on Saturday.

“We knew that this game was going to mean so much to this fan base and this community," Wells said "That’s huge, no matter wherever we’re playing or whoever we’re playing. The fact that we could do this on the 50th anniversary is amazing.”

Marshall (7-0, 4-0 Conference USA) got another standout performance from its defense and turned three turnovers into scores on a day when the university remembered the 75 people killed on Nov. 14, 1970.

Wells played high school football 50 miles away in Charleston and learned about the tragedy starting as a young child.

“Walking out, there were a lot of emotions," Wells said. “Then after that, I had to snap back into playing Middle Tennessee.”

And play, he did.

After several early overthrows, Wells found his groove and Marshall kept the momentum for good. Wells finished 25 of 37 for 336 yards, all season highs. Two of his TD passes each went to Corey Gammage and Willie Johnson.

“I see it every week now," Holliday said. "I see a young kid that’s growing up. His teammates have so much respect for him. Just proud of the way he’s maturing and growing up. He’s getting better each week.”

Then, after Middle Tennessee quarterback Asher O'Hara fumbled the ball away on a hit by Marshall's Darius Hodge, Wells ran for 6 yards and made three straight completions. His 17-yard throw to Gammage put the Thundering Herd ahead 21-7 at halftime.

Wells kept it going after safety Nazeeh Johnson ripped the ball away from Middle Tennessee wide receiver Marquel Tinsley inside the Marshall 10 early in the third.

A 46-yard pass to Johnson and a 14-yarder to Gaines were followed by Gammage's second TD grab. Gammage went up high for a 28-yard catch in the end zone for a 28-7 lead.

Marshall shifted to its passing attack after Middle Tennessee held running back Brenden Knox in check. Knox, who entered the game averaging 112 yards on the ground, was held to 70 yards on 16 carries.

“We shut the run down really well," Middle Tennessee coach Rick Stockstill coach. "The run being stopped so well, they went to the pass and he did a nice job. (Wells) picked us apart.”

Middle Tennessee (2-6, 2-4) couldn’t do much against the nation’s top rush defense. O’Hara, whose 476 rushing yards entering the game were the third most for a quarterback nationally, was limited to 39 yards on 11 carries. He ran for a score, threw for another and completed 29 of 44 passes for 241 yards.

Middle Tennessee: The Blue Raiders had not played in three weeks after Charlotte called off last week’s game against them due to COVID-19 issues. The postponement came a day before the game and kept Middle Tennessee from getting extra work for Marshall.

"We were taking easy stuff, but we just couldn’t make big plays and we didn’t complete our deep shots when we took them,” O'Hara said.

Marshall: It was a special performance on an emotional day for the Thundering Herd, which piled up 520 total yards.

Middle Tennessee, which lost at home to Troy earlier this season, is scheduled to play the Trojans on the road next weekend to finish a rare in-season home-and-home series. But Troy's game Saturday against No. 15 Coastal Carolina was postponed Friday due to a combination of positive COVID-19 tests and injuries for a specific position group within the Troy football team.