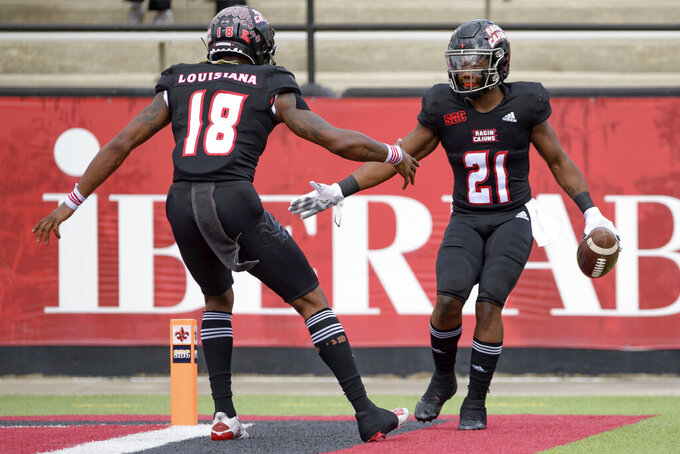 Louisiana-Lafayette already has won the Sun Belt West Division but needs to keep winning to remain in the national rankings and vie for the best possible bowl bid. ULM would like nothing more than to break into the win column against its state rival.

Louisiana-Lafayette’s running game, which averages 201 yards per game and is led by RBs Elijah Mitchell and Trey Ragas, against ULM's defensive front, which is allowing 258.9 yards rushing per game.

Louisiana-Lafayette has a 13-11 record in games played in Monroe. ... ULL has won two in a row in the series and 10 of the last 13 meetings, with 10 of those games decided by nine points or less. ... ULL’s 7-1 record is the program’s best start to a season since 1976, when it opened with eight straight victories. ... ULL is 11-0 against Sun Belt West Division teams since Ragin’ Cajuns head coach Billy Napier was hired. ... The ULL defense has made 11 interceptions, the most for the Cajuns since they picked off 14 passes in 2013. ... ULL has forced at least two turnovers in four straight. ... ULM’s home finale against the Ragin’ Cajuns marks the Warhawks’ first game in 21 days, matching its longest layoff since late in the 2005 season. The three-week hiatus in 2005 resulted from schedule adjustments made following Hurricane Katrina. ... ULM’s 11 regular-season opponents have a combined record of 48-41 (.539) against Football Bowl Subdivision competition in 2020, making it the Sun Belt’s third hardest schedule by that measure.