No. 24 Texas has to beat Baylor, then wait on B12 title shot 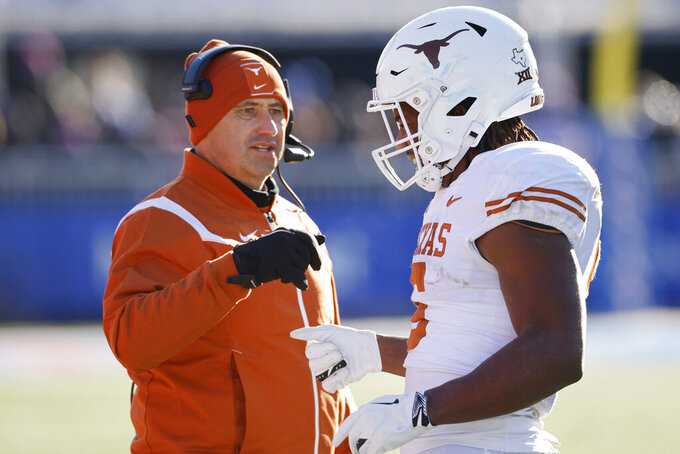 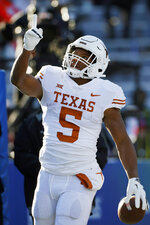 AUSTIN, Texas (AP) — Texas coach Steve Sarkisian laid out to his players the realistic, though somewhat out-of-their-control, scenario about how the 24th-ranked Longhorns can still get into the Big 12 championship game.

Dave Aranda got philosophical with his Baylor team going into the regular-season finale Friday after a crushing last-play loss to the conference's undefeated playoff contender, and with no chance to repeat as Big 12 champs.

“I am hurt, but I am not slain; I’ll lay me down and bleed awhile, and then I’ll rise and fight again," Aranda told his team, quoting 16th century Scottish warrior Andrew Barton.

The Longhorns (7-4, 5-3 Big 12, No. 23 CFP) have to beat Baylor for a chance to get to the Big 12 title game against fourth-ranked TCU. Then, they would have to wait until Saturday night to see whether Kansas can knock off 15th-ranked Kansas State for the first time since 2008.

“If we don’t mow our own lawn, then it doesn’t matter what happens Saturday night,” Sarkisian said. “So I think the focus and the intent is taking care of our own business first. ... Because that (Kansas State) game is going to kick off 24 hours after we’re done, we can invest our time and energy into that as it pertains to the Big 12.”

Baylor (6-5, 4-4) had gotten back into conference contention with a three-game winning streak, including two on the road. But they lost at home the past two weeks, 31-3 to Kansas State before TCU scored nine points in the final 2 minutes, 7 seconds and won 29-28 with a chaotic game-ending field goal.

The Longhorns have alternated wins and losses over the past five games, with a dominating 55-14 win at Kansas last Saturday.

“It’s going to be a heck of a ball game against a very good Baylor team. One a lot like us, is probably looking at a few of their games thinking, man, a play here, a play there, and ultimately maybe things are going a little differently for them in this last weekend," Sarkisian said. "In this instance, feels kind of like a playoff game.”

If Texas wins and Kansas State loses this weekend, the Longhorns own the head-to-head tiebreaker because of their 34-27 road win over the Wildcats on Nov. 5.

Texas running back Bijan Robinson had career highs with 243 yards and four touchdowns rushing against Kansas, and leads the Big 12 with 1,400 yards rushing (127.3 yards per game) and 16 TDs. He has run for only 98 yards total in his two previous games (55 and 43 yards) against Baylor, which is third in the Big 12 allowing 131 yards rushing per game.

“His film is very impressive. We played Kansas State a few weeks back, and Deuce (Vaughn) had his patience, kind of his sliding back there; A, B, C, D, looking for a gap to hit, then he sees it and hits it," Aranda said. “This guy is very similar in that, but then also, if there’s just a sliver of daylight there, he can take it and lower his shoulder and move the pile too.”

Baylor true freshman Richard Reese is 92 yards shy of becoming the Big 12′s sixth 1,000-yard rusher this season. He has 14 rushing TDs and his 908 yards is already a freshman school record that ranks second nationally for freshmen. Texas is second in the Big 12, allowing only 125 yards rushing per game.

Jaylan Ford leads all Big 12 linebackers with three interceptions, and Texas has turned all of those picks into touchdowns going into halftime of a game. He is second in the league with 96 tackles (8.7 per game) and is also the league leaders for forced fumbles (three) and fumble recoveries.

Baylor is 0-4 against ranked opponents this season, after going 5-1 vs. the Top 25 last season. ... Bears LT Connor Galvin is set to make his 49th career start, which would break his tie with Spencer Drango (2012-15) for the school record. ... Freshman Kelsey Johnson has been used primarily as a blocking tight end, but had two touchdowns last week against TCU, on a 2-yard sweep run and later a 12-yard catch.