No. 25 Clemson looking for answers against Boston College 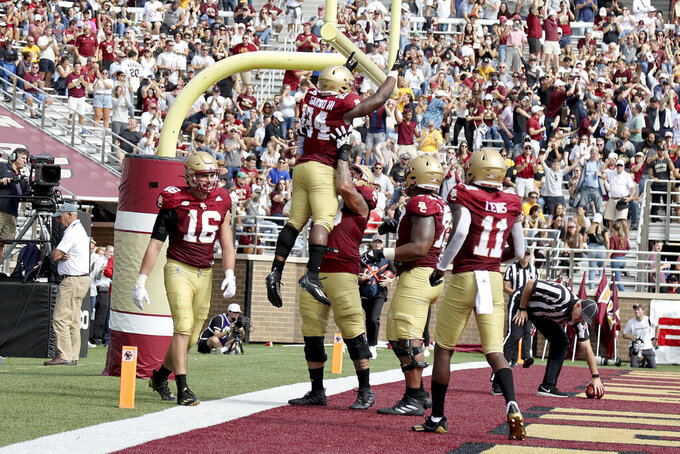 Boston College running back Pat Garwo III (24) is lifted by a teammate after scoring a touchdown during the second half of an NCAA college football game against Missouri, Saturday, Sept. 25, 2021, in Boston. (AP Photo/Mary Schwalm)

No. 25 Clemson is desperately looking for answers after its disappointing start to the season. Rising Boston College won't be an easy solution to the Tigers' problems.

The Tigers (2-2, 1-1 Atlantic Coast Conference) have lost twice in September for the first time since 2014. That was also the last season Clemson missed the College Football Playoff; now it appears their six-year run may be over.

“Ain't no funeral around here,” he said.

The Tigers have struggled on offense in their three games against Power Five opponents, scoring a combined 38 points against Georgia, Georgia Tech and North Carolina State. Clemson had average more than 40 points a game from 2018-2020.

Clemson's defense has been strong, although it will have lost its third starter since season's end with defensive tackle Bryan Bresee out for the season with a torn ACL.

“Sometimes to make progress, you have to go backwards,” Swinney said. “You won't make progress if you're not more disciplined and don't do things with fundamentals. You have to be better at the basics.”

Boston College (4-0) has been very good at just about everything so far. The Eagles are coming off a dramatic, 41-34 overtime win over Missouri and will look to start 5-0 for the first time since 2007 when they won the ACC Atlantic Division.

Boston College has not-so-fond memories of coming to Death Valley a year ago when it rolled out to an 28-10 lead in the second half before falling 34-28.

“Last year, everyone was getting excited because we competed, but we weren't winning,” Hafley said. “When you're in a close game like that, you have to finish it off.”

The Eagles are 15th nationally with more than 41 points a game this season, something the Tigers are typically accustomed to doing in years past.

Boston College sophomore Pat Garwo is fourth in ACC rushing. He ran for 175 yards and two touchdowns in the Missouri win last week.

Some things to watch for when Boston College plays Clemson:

The Tigers' 13-year coach is certain his team will respond to their early season struggles and get the team back on track. Swinney acknowledged 2-2 in September has become an unusual experience. “It's disappointing when you don't achieve what you set out to achieve,” he said. “But what are you going to do about it? We've always responded.”

Due to a quirk in scheduling from the COVID-19 pandemic, this will be the third straight season Boston College must play at Death Valley. The Eagles lost 59-7 to the second-ranked Tigers in 2019 before their close call to No. 1 Clemson in 2020. It's part of a 10-game losing streak for BC to the Tigers.

Clemson will be without several critical players when it faces Boston College. The defense was already missing starters in safety Lannden Zanders and defensive tackle Tyler Davis. DT Bresee was added to that list after last week. On offense, starting tailback Will Shipley will need about a month to recover from a lower leg injury sustained against North Carolina State last week.

Boston College controlled the ball for 13:42 of the third quarter, going from tied with Missouri to a 27-17 lead. The Eagles ran 29 plays for 125 yards, 67 of them by tailback Patrick Garwo. “It definitely takes a toll on the defense, taking control of the game like that,” Garwo said. “It's big and we take a lot of pride in that.”

Boston College is preparing for a wild, raucous atmosphere at Clemson that it hasn't seen in couple of seasons. The Eagles played in front of 44,500 at home last week against Missouri. They'll see almost twice that at Death Valley. Attendance there a year ago was limited to less than 20,000 because of pandemic restrictions. “