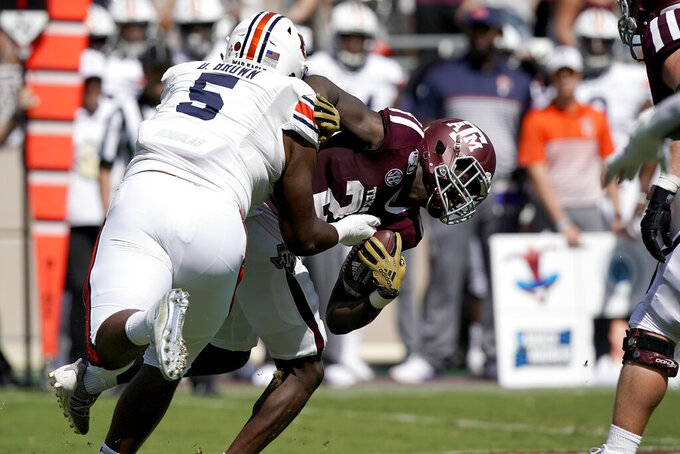 AUBURN, Ala. (AP) — The Auburn Tigers have successfully navigated one-third of the season largely because of one of the Southeastern Conference's better defenses.

The seventh-ranked Tigers (4-0) have climbed the rankings with a strong start while breaking in a freshman quarterback and facing two Top 25 opponents.

"They've played very good football all year," Auburn coach Gus Malzahn said of the defenders. "You think back to the Tulane game and offensively we really struggled, but our defense really rose up when we were struggling and allowed us to get to the second half and start moving the ball.

"Characteristics of a good team is they complement each other, so there's going to be a time that the offense is going to have to help the defense out."

The defense and the SEC's top running game have helped take some of the burden off quarterback Bo Nix.

The combination has worked well enough to enable the Tigers to become the only team to already beat two opponents ranked in the AP Top 25 — No. 13 Oregon and No. 23 Texas A&M.

Auburn held the Aggies to three points through the three quarters before weathering a comeback attempt in a 28-20 victory . The Tigers allowed only seven points after the half in a 27-21 win over Oregon , ultimately won with Nix's late touchdown pass.

Defense has been the Tigers' consistent element while the offense has gained its footing, with the toughest games awaiting against four other top 10 teams.

The defense has been especially tough against the run, ranking second in the league behind No. 3 Georgia.

That's especially important going into Saturday's game against Mississippi State , which has been powered by a running game led by Kylin Hill.

The strength of Auburn's team has been a defensive front led by tackle Derrick Brown and end Marlon Davidson, along with safety Jeremiah Dinson.

"I think they have one of the most talented and productive defensive fronts in the country," Mississippi State coach Joe Moorhead said. He described Brown as "just strong, physical and explosive."

"We want to kind of keep the train going," Brown said.

Auburn has held Oregon, Kent State and Texas A&M below 100 rushing yards. The big question about the defense was the linebackers after replacing several key players, including leading tackler Deshaun Davis.

K.J. Britt has stepped into Davis's job at middle linebacker and freshman Owen Pappoe, like Nix a five-star recruit, has started every game.

"I didn't think we were going to have too much if any of a letdown and so far we haven't," Malzahn said. "Those guys are playing downhill. They're playing with great physicality. They're tackling well. I think they've done fantastic so far."