Oregon opens at No. 4 in CFP rankings, travels to Washington 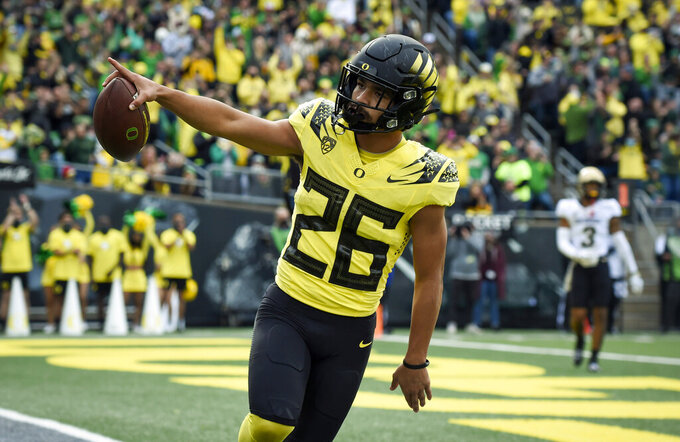 No. 7 Oregon at Washington. There's another layer of importance for the Ducks (7-1, 4-1), who earned the No. 4 spot in the initial College Football Playoff rankings of the season. The preseason predictions had this game underlined, circled and bolded as the one to possibly go a long way in deciding the Pac-12 North. A win by Washington (4-4, 3-2) would create a logjam near the top. A victory by Oregon would firmly put the Ducks in the driver's seat. Oregon has won the last two meetings between the two rivals, and 14 of the last 16. Ducks QB Anthony Brown will try to carry his sizzling October into November. He led Pac-12 quarterbacks last month in completion percentage (71%), and total offense per game (308.8). He's spreading the wealth around this season, too, throwing 10 of his TD passes to nine players.

USC at Arizona State. At the outset of the season, this game figured to go a long way in deciding the Pac-12 South winner. The Trojans (4-4, 3-3) and Sun Devils (5-3, 3-2) both currently trail Utah (5-3, 4-1). Both have also lost to the Utes this season. The Trojans have won five of the last six games over Arizona State, including a thriller last season when quarterback Kedon Slovis tossed two TD passes in the final three minutes to rally for the win. USC will be without one of the country's top receivers in Drake London, after he broke his ankle on a TD catch last weekend against Arizona.

Utah running back Tavion Thomas. He rushed for a career-most 160 yards and scored four TDs in a win over UCLA. It was the most yards rushing in a game by a Utah player since Ty Jordan had 167 yards versus Oregon State in '20. Thomas is a transfer from Cincinnati.

Oregon State (5-3, 3-2) at Colorado (2-6, 1-4). It's homecoming and Hall of Fame weekend at Folsom Field on Saturday. Nine Colorado athletes will be inducted, including running back Chris Brown. Oregon State rallied from a 31-3 deficit to win 41-34 in overtime during the last meeting at Folsom in 2018. The Beavers are one win away from becoming bowl eligible for the first time since 2013. The Buffaloes need to win out to be considered for a bowl.