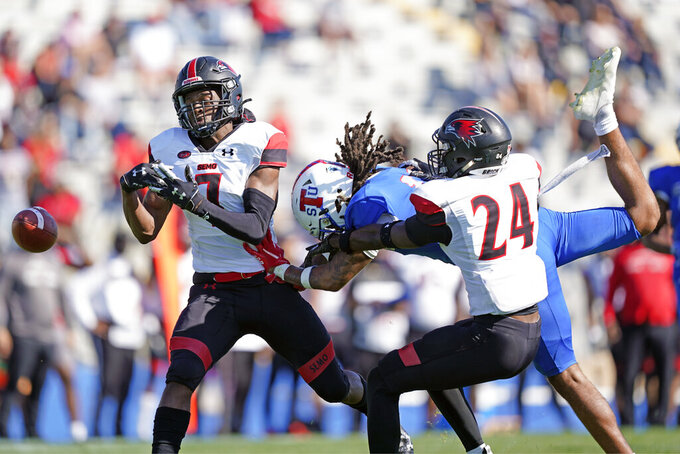 Southeast Missouri State defenders Lawrence Johnson (7) and Shabari Davis (24) break up a pass intended for Tennessee State wide receiver Zaire Thornton during an NCAA college football game Sunday, April 11, 2021, in Nashville, Tenn. Because of COVID-19, the OVC postponed the 2020 season to the spring, and the decision was made to play games on Sunday because member schools needed flexibility to staff all the spring sports. (AP Photo/Mark Humphrey)

NASHVILLE, Tenn. (AP) — William and Felicia Mosley found the perfect way for them to make the most of the four-hour drive from their Montgomery, Alabama, home to cheer on their son at Tennessee State.

They turned on Zoom and attended church services.

Juggling church and football is a typical Sunday for NFL fans. Thanks to the coronavirus pandemic, it became the norm for college fans like the Mosleys as most Football Championship Subdivision leagues moved their schedules to the spring. Schools still faced some of the same issues that colleges dealt with during the fall and winter — canceled games, limited practices, sidelined players.

But Sundays were more of a spring thing.

The Ohio Valley Conference and Northeast Conference decided to play on Sundays to help schools staff all the sports in this chaotic spring.

The Mosleys worshipped virtually through their own church service, then joined her brother's service in St. Louis, Missouri, before arriving in Nashville in time to cheer their son Kaleb, Tennessee State's punter and kicker.

“It’s worked out great for us because usually we’re traveling ... so we get to listen in the car while we’re driving,” William Mosley explained.

Said TSU fan Doris Thomas said: “You get up cheering for the Lord, and you come in here and cheer for the team."

With kickoffs ranging from 1 p.m. to 2:30 p.m., TSU athletic director Mikki Allen said it made perfect timing for going from one church to another, and he hears from fans who enjoyed a great church service first.

“In the Southeast, football is a religion as well,” Allen said. “There’s a lot of avid football fans, obviously, in Middle Tennessee, in the Nashville area. So they’re coming right after church service, whether they’re having church service by Zoom or in person, and they get an opportunity to come to the legendary William Jasper Hale Stadium.”

The OVC was one of the last conferences to decide to postpone the season to spring. Commissioner Beth DeBauche said playing on Sunday was an easy decision with member schools needing flexibility to staff all the sports being played.

“Sunday was the window that we thought we could balance out all the staffing responsibilities and again, still give that requisite space, a standalone space for football that fans and families could also come and attend and be a part of it ...,” DeBauche said. “It really has turned out to be a good decision for the league.”

Some FCS teams played a few games last fall. Jacksonville State played four last fall and then won the OVC regular-season title this spring. The Gamecocks will be part of the FCS playoff bracket of 16 teams, down from the usual 24, announced Sunday.

But there was no escaping the impact of COVID-19.

“It’s been a glorified spring ball, especially with COVID and injuries and stuff like that," said TSU coach Rod Reed, whose contract was not renewed Monday after a 2-5 season. "You really haven’t been able to put your best team on the field all year long.”

The Dukes (4-0, 2-0 Colonial Athletic Association) are the top-ranked team in the STATS Perform FCS Top 25, but have not played a home conference game this season because of cancelations due to virus-related issues. If they beat Richmond on Saturday, the Dukes would be in position to claim the league’s automatic berth in the FCS playoffs.

Before the spring season, the CAA ruled that a team needed to play at least three conference games to qualify for the automatic berth. If JMU-Richmond is called off, the Dukes would likely get one of the six at-large bids.

Tennessee State's season, which began in August last year, is over.

The Tigers started practice in the middle of August only to be shut down for 10 days by the virus. Then the OVC decided to postpone the season to spring, so Reed didn't bring players back until Jan. 6. Team meetings and recruiting all took place via Zoom. The Tigers' first game in February was postponed by a winter storm.

TSU had only five positive coronavirus cases during the season, yet contact tracing often scratched players just before kickoff.

Junior James Green moved from outside linebacker to the middle, back to outside and to the weakside all because of virus protocols and injuries knocking players out.

“We all had to be flexible because we didn’t know what was happening next," Green said. "So we all were, on one page, of one accord and we all were able to, you know, adjust to what was going on. So we all handled it very well.”

Off the field, OVC schools still tested athletes three times a week, and the football team had lots of company with volleyball and soccer joining basketball, softball, tennis, golf, track and field already playing this spring. That spread the athletic training staff thin caring for all athletes while handling the virus testing.

An athlete needing treatment for an injury had to make an appointment to prevent too many players gathering in one spot. A limit of 20 players in the weight room at any one time also meant planning ahead. Equipment staff was also spread thin.

Reed spent one afternoon playing phone tag with a staffer who was tied up with softball.

“It has been tough on everybody,” Reed said.

Offensive tackle Cam Durley acknowledged playing in the spring was a bit strange even as he says he would have loved the opportunity to play a Sunday game at Nissan Stadium — home to the NFL’s Tennessee Titans. And though he missed out on that chance, playing on Sundays this spring has offered a preview of possibilities to come.

“Me having aspirations to make it to the league, it’s the level of feeling ... it feels good just to kind of like visualize potentially the future,” Durley said.

The OVC commissioner said everyone from athletes to administrators have been grateful they got to play this spring — but it isn't over just yet.

“I’m not going to breathe a sigh of relief until the season is over," DeBauche said, “just to make sure everything is fine."