Pitt's Pickett emerging in ACC's next wave of NFL-ready QBs 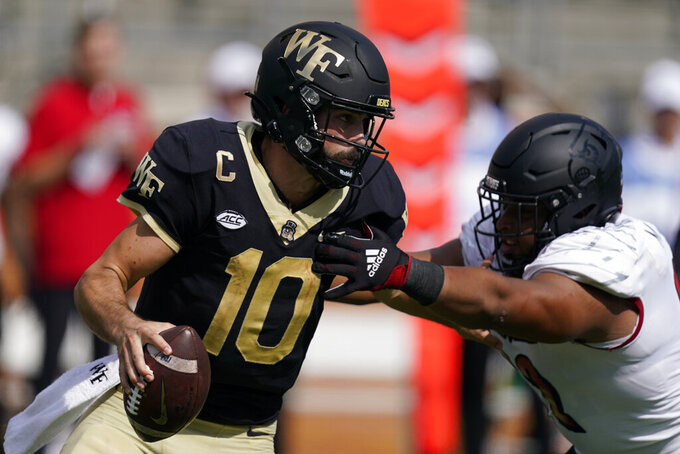 Wake Forest quarterback Sam Hartman looks to pass against Louisville during the second half of an NCAA college football game on Saturday, Oct. 2, 2021, in Winston-Salem, N.C. (AP Photo/Chris Carlson)

Kenny Pickett's decision to return for his redshirt senior season is working out well for Pittsburgh, the nation's top-scoring team.

Pitt coach Pat Narduzzi believes the decision also will pay off for Pickett in the next NFL draft.

"He’s made himself a lot of money coming back,” Narduzzi said.

Pickett is poised to join North Carolina's Sam Howell, Virginia’s Brennan Armstrong and possibly others in the next wave of Atlantic Coast Conference quarterbacks on NFL draft boards.

The ACC, which may be out of the national championship pictures, already sits atop all other conferences in the NFL quarterback derby. Nine NFL quarterbacks with at least one start this season are from ACC schools, the most of any conference.

That list doesn't include the inactive Deshaun Watson, whose status is in limbo following allegations of sexual assault and harassment. With Watson, the ACC would claim almost one-third of the NFL’s starting QBs, including this year’s No. 1 overall pick, Trevor Lawrence.

There's a list of candidates who could be next in line.

Howell has had an uneven season. He was sacked a combined 14 times in road losses at Virginia Tech and Georgia Tech.

Virginia Tech opened the season by sacking Howell six times and forcing him into the first three-interception game of his career in a 17-10 Hokies win.

Then, after the Tar Heels offense rolled in a 59-point output in a win against Virginia, Georgia Tech sacked Howell eight times. He lost three fumbles in the 45-22 loss to the Yellow Jackets.

North Carolina lost receivers Dazz Newsome and Dyami Brown and running backs Javonte Williams and Michael Carter in this year's NFL draft, so perhaps some decline in Howell's production may have been expected.

Howell is still passing for almost 300 yards per game. He said he's working to get the ball to young receiver Josh Downs.

“I think for us this year, obviously, we want to get Josh the ball as much as possible from the type of player he is,” Howell said Tuesday. “I think we can do still do some more stuff to try to get these outside guys involved as well.”

Pickett has emerged as a Heisman candidate. He ranks second in the nation in passing efficiency and with 19 touchdown passes. Pitt (4-1, 1-0) leads the nation with 52.4 points per game following last week's 52-21 win at Georgia Tech.

Pickett has thrown 19 TD passes with only one interception.

“He’s just a smart football player,” Narduzzi said. "... He’s put the work in, and he deserves what he’s getting right now.”

Armstrong, the red-headed, left-handed passer, ranks second in the nation with his average of 394.60 yards passing per game. He ranked first before throwing for 268 yards in a 30-28 win at Miami on Thursday night.

“He’s not kind of on the fringe, he’s right in the middle of that realm,” Mendenhall said. “... He’s really good. He can make every single throw, he’s tough, competitive, smart, durable.”

Some skeptics may question Armstrong's status among top quarterbacks even after he has completed 65% of his passes with 14 touchdowns.

“Anyone that doesn’t think that, I guess they’ll find out the hard way, right?” Mendenhall said.

Led by Sam Hartman, No. 19 Wake Forest (5-0, 3-0) is undefeated. Hartman threw for 324 yards and two touchdowns in last week's 37-34 win over Louisville despite Malik Cunningham's big game for the Cardinals. Cunningham threw for 332 yards with two TDs and ran for two scores.

Two veteran starting quarterbacks are out with injuries.

Boston College’s Phil Jurkovec was already appearing on NFL mock draft lists before he hurt his wrist the second week of the season. He is not expected to return this season.

D’Eriq King’s status at Miami remains uncertain following his shoulder injury in a 38-17 loss to Michigan State on Sept 18. King's 64.7% career completion rate at Miami is the best in school history.

Other schools have had to rotate quarterbacks.

After missing two games with an injury, Georgia Tech's Jeff Sims reclaimed the job from Jordan Yates. Sims returned to lead Georgia Tech to a 45-22 win over No. 22 North Carolina.

Sims' 359 yards passing in last week's loss to Pittsburgh were the most for a Georgia Tech quarterback since George Godsey's school-record 486 yards against Virginia in 2001. Sims is dynamic but not yet consistent, and his interceptions on his first two passes of the game set the stage for the 52-21 loss.